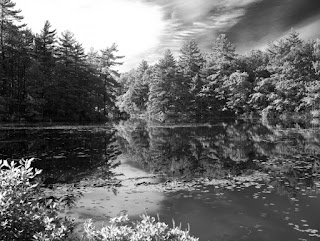 I can't believe it's already June. Spring is nearly gone, which I like because (quite literally) I'm sick of pollen. Unfortunately, this means that summer is coming - with humid weather and swarms of mosquitoes.

At least for now mornings are still mild and cool, which is why yesterday I rode my bike from Arlington to take another look at the Harold Parker State Forest (HPSF) in Andover.

The forest covers a hefty chunk of southern Andover and North Reading with many, many trails crossing it. It's a favorite hang out place of local mosquitoes and mountain bikers so if you don't mind meeting them on trail, head out and have fun. 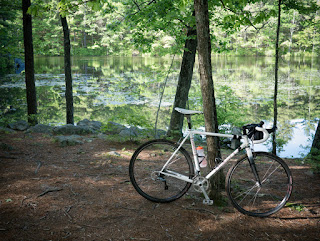 I started, as usual, by entering the network of trails near the parking lot at Jenkins Road, then followed Harold Parker Road and Bradford Pond Road towards Salem Pond. Now, keep in mind that those "roads" aren't really roads but barely wide paths. As long as you stay on the wider trails you can move quickly and won't get lost. 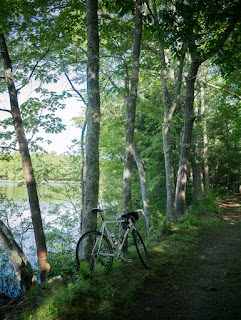 After crossing Middleton Street, I followed Stearns Pond Road around Steve's Pond. This trail feels almost like a highway compared to the many smaller paths in the forest - it's wide and relatively even.

After crossing Turnpike Street (a very busy road), I continued on Berry Street and then found the entrance to a tiny foot path at the end of Windsor Lane. This route is called Old Farnum Street on the map but you would have to be very, very drunk to call it a street at all. It's barely accessible, heavily overgrown, narrow and blocked by many fallen tree trunks. I had to walk my bike and portage it across logs nearly the entire length of this section.

However, the end was quite rewarding because then I found this: 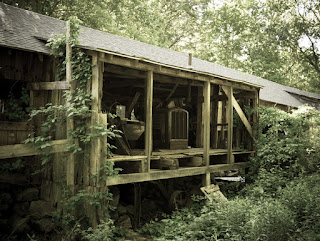 There is a well-hidden and completely abandoned old lumber mill right at the Boston Brook. The mill is in poor condition but once you peek inside, you will find that a lot of its original equipment is still in place. 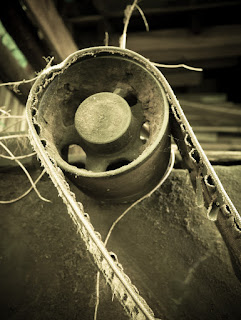 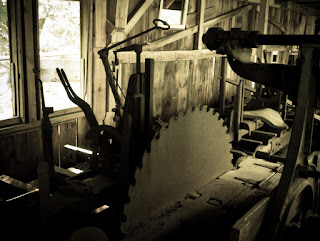 Once I passed the mill, I followed the path towards Farnum Street, which ends at a farm. In fact, if you want to take a peek at the mill, it's much easier to access it from Farnum Street as long as you ignore the farm gate.

The next place on my list was Mary French Reservation best accessed when you ride Grey Road towards Korinthian Way.

This place is fun both for joggers and bikers. It has probably the longest and narrowest boardwalks I've ever found in Boston area, installed just a few feet over the swamp. Riding a bicycle there is fun and a bit of challenge. 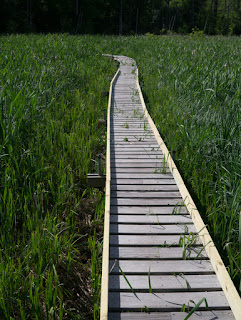 The boardwalks end with a very narrow trail that runs between closely-spaced trees. In fact, some of them are so close to each other that I could barely fit my bike in-between. 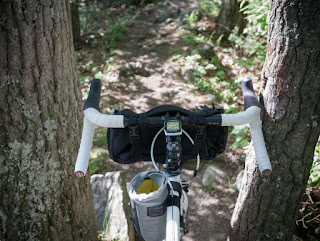 The 44cm-wide drop bars on my bike were a tight fit between those trees. Now that's what you call a singletrack!

My last section of the extensive trail network in HPSF ran along Phillips Road and Walker Road. Again, these aren't your typical roads but they are wide enough to move fast. No mountain bike needed here, just bring you widest tires (over 35mm preferably).

HPSF is a great place for recreational cycling but just like any other large forested areas nearby it would be best enjoyed in the fall when mosquitoes and flies are gone and foliage season is in full swing.
Posted by bostonbybike at 13:28