I woke up before 6AM and started with a quick bath in the lake. Packed my stuff only to discover that the tent was wet from morning dew. I had no choice but to pack the tent wet but it wasn't my biggest worry at that time. My cell phone had no reception between those mountains so I had no chance to tell my wife I made it safely to the campground last night. On top of that the battery was nearly dead. 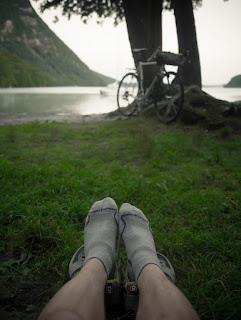 I decided to start riding north until I could get some cell signal but I didn't even made it to the end of the lake before my phone died. Fortunately, most buildings have external outlets available so I had to steal some power from a nearby house. The cell signal didn't show up all the way until Brownington, where I stopped briefly at the Old Stone House Museum... 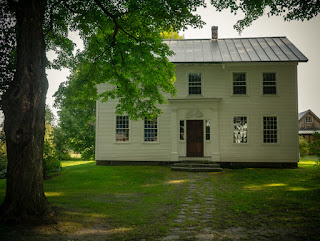 ... and even met some Amish on the road. 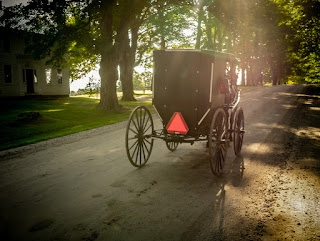 It looked like a beginning of a hot, sunny day and my goal was to get to Newport for large (and late) breakfast. 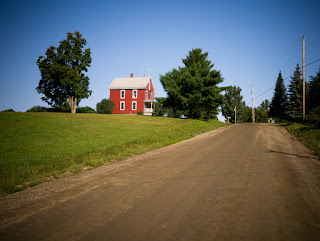 Pine Hill Rd runs along I-91 and is clearly a much more fun place to be than the highway.

In Newport, I stopped at the Natural Market & Cafe, which is a grocer, a cafe, a bakery and a restaurant in one and offers absolutely awesome food selection with everything home-made.

After a delicious breakfast, I took Rt 105 west to enter Searles Rd, taking me through a rural area full of cattle farms (duh!) and corn. From there, I could see Jay Mountain in the distance - the peak of my tour, literally. 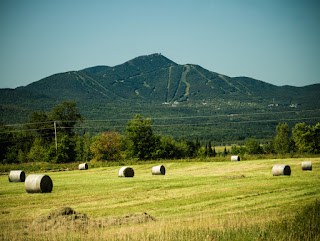 Somewhere there on my way to Jay Peak I met a woman riding on a horse. She saw me and a car approaching. The horse was very calm when a car sped by, but freaked out when saw me on a bicycle. She managed to calm him down somehow and asked me to stop so the horse could sniff my bike and get familiar with this type of machinery. Damn XXI century - speeding cars do not scare horses anymore but bicycles do?

Anyway, next came a quick stop at the covered bridge... 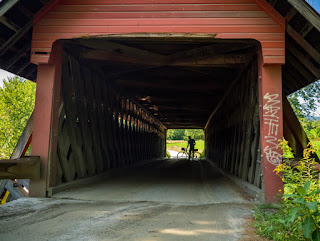 ... and time to start climbing. For some reason there were more cyclists on Rt 105 to Jay Mt than cars. Many of them were riding uphill, passing me on the way but lots of them were going downhill. Until the following day, it was the largest number of cyclists I saw in Vermont so far, but they were all the Lycra-type guys on their carbon machines. Maybe I ran into a local "roadies" club or something? 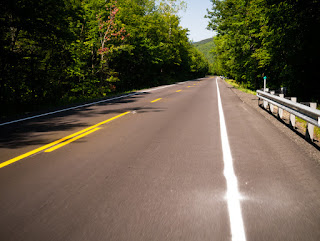 I also noticed that while I had to climb continuously for 10km (6mi) in full sun at the peak of the day, those going downhill enjoyed their shade. Is that fair?! At least the mad ride down the mountain was rewarding and I quickly reached West Jay Rd. It was also noticeably cooler and more breezy on this side of the mountain.

My next stop was Richford but first, on my way there I tweeted this:

It seems like it doesn't make sense but if you are on West Jay Rd you will actually end up in Canada not knowing about it. A tiny section of the road runs on the other side of the border without any notification. Not counting a bored border patrol parked nearby.

Richford was just a quick resupply stop before I entered Missisquoi Valley Rail Trail. The best part of all this - it was flat. No more crazy climbing, which means I could move faster. 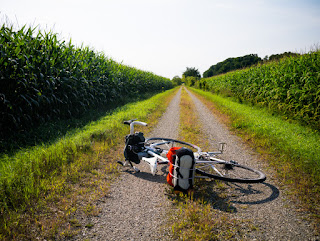 This part of the route was very straightforward - just follow the trail until pretty much the end. It's just a bit more of everything I saw earlier - more cows, more corn and more gravel. 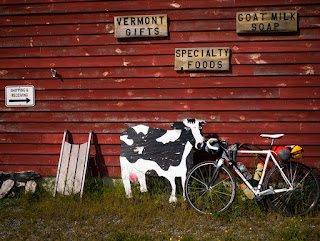 Once I got to Sheldon Junction, I had to ride north to Swanton. The old railway that used to run along Rt 78 is now gone and I hoped that I could continue on that rail trail. Unfortunately, it turned out that except of removing the old tracks not much has been done to the rail bed in terms of surface preparation. The gravel on the trail was so coarse that I can't picture riding any bicycle there comfortably, except a fat bike. I doubt a regular mountain bike would make it. 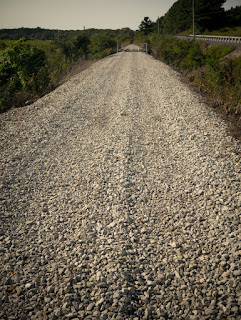 I abandoned the trail and took Rt 78 to Swanton, stopping at Highgate for a moment. At that point the sun was already slowly setting and I was worried that I would face the problem from the previous night - a full campground. This time wild camping would be a bit more tricky because the entire area at Lake Champlain is the Missisquoi National Wildlife Refuge and camping there would be certainly illegal. 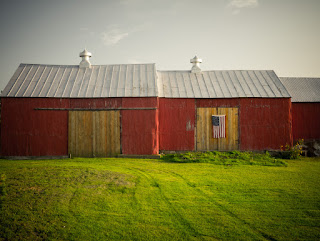 Fortunately, Campbells Bay Campground had still spaces available so I could enjoy a hot shower, company of other cyclo-tourists (mostly from Canada) and swarms of mosquitoes. 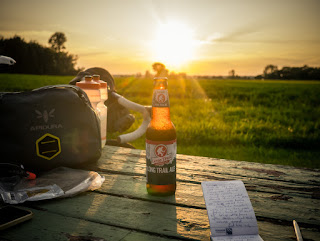 And a cold beer. 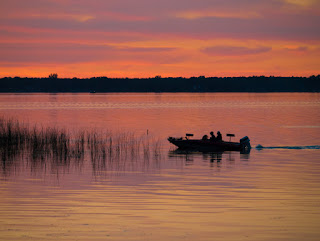 And a spectacular sunset. 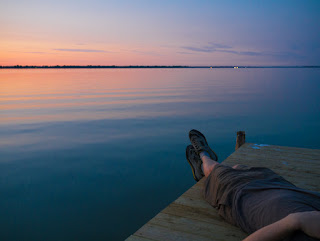 And some time on the pier.
Posted by bostonbybike at 22:17