Cape Cod by ferry and bike

My daily escapades this week are over. On Friday, it was the time to join my family at the Cape Cod. I definitely didn't want to drive there for two reasons - heavy Friday traffic of weekend travelers and the problem that on Sunday we would have to drive back in two separate cars, while we know that it's much easier to manage kids during the long ride with two adults in the car.

That left me with three options: (1) take a train from South Station to Hyannis and then continue by bike to Osterville, (2) take a bus to Hyannis and be picked up (no bikes on buses allowed, unfortunately) or (3) ride my bike to the ferry terminal, take a fast ferry to Provincetown, then ride to Osterville, about 68mi (110km) away. Clearly, the last option looked like most fun.

I had to start early to be at the Seaport Blvd. pier well before 8:30AM when the ferry was leaving. Getting there was pretty straightforward - take Minuteman Bikeway to Alewife, then continue along the river on Soldiers Field bike path, cross the Common and over the bridge to the Seaport District. I have never used this ferry before but boarding was quick and the ferry was... well, fast (duh!). The whole trip went well and just a bit over and hour and a half later I was in P'Town. 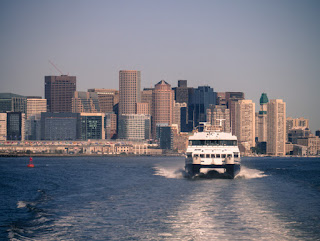 I'm on a boat! And a whale watch tour is chasing me. 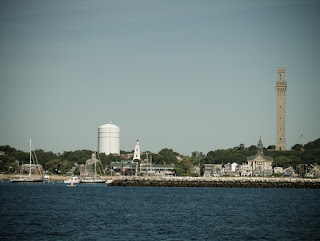 
I have never been to Provincetown before and the first thing that surprised me was that Italian-looking tower dominating over the town. As I found out later, it was built to commemorate first pilgrims who came here in 1620 to hang out for a while only to eventually settle down in Plymouth. I always thought those guys came here from England but apparently, there were some Italians among them as well ;)

What didn't surprise me at all about P'Town was the number of rainbow flags decorating buildings in the town, churches included. But P'Town has been famous for it for quite some time. 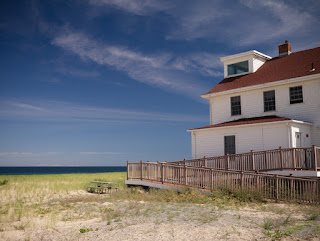 
I didn't spend much time in the town because my goal was to get to Osterville in a reasonable time. I only took a quick ride to Race Point on the north shore and then continued towards Truro. 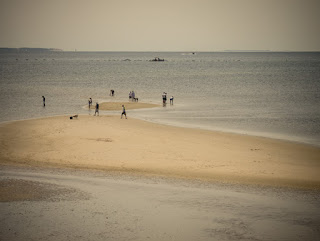 Beach from the bay's side


While getting closer to Truro I started being hungry, which reminded me that my breakfast happened long time ago before I boarded the ferry. Fortunately, stopping at Jams Gourmet Grocery took care of that problem.
I didn't really plan to stop frequently on my way to Osterville and the rest of the ride was quite boring and uneventful, to be honest. Part of it was because I took the Cape Cod Rail Trail from Wellfleet. It's a bike path built in place of the old railway tracks, it runs through the forest nearly all the time and rarely crosses with car traffic. This means I could just ride, eating miles quickly without any interruption. In fact, what I didn't realize until later, I rode the full length of this trail (~20mi) without making a single stop. It just happened. 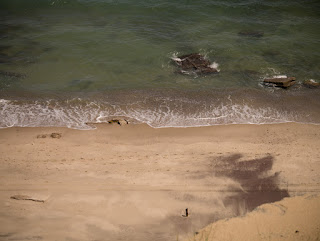 Marconi Wireless Station Site - or rather what's left of it

Well, actually there was one planned stop - at the Marconi Wireless Station Site. Reading about it in the past, I was interested to see the place where the first Europe to USA radio communication in the history happened. Unfortunately, the site is quite disappointing. There isn't nearly anything left of the original station. Erosion ate almost all of it over the years. Nevertheless, the history behind it is interesting. Marconi was a brilliant Italian who got into experiments with radio waves at a young age (about the time today's teens experiment with booze). By the time he was 27, three dots crossed the Atlantic. That means - he sent a Morse code for the letter S from a transmitter in UK to a receiving station in Newfoundland. The Cape Cod station was built later and was able to receive much longer messages than just three stupid dots, such as "Check this, dude! #swag #YOLO". No, actually more like: "SOS. We just hit an iceberg and are going down with pride. HMS Titanic".

But going back to my ride. I realized that over the last years I covered many possible ways of getting to the Cape: by car, by bus, by bike, and now by ferry. There are only two options left: a train and a plane. Maybe next year.
Posted by bostonbybike at 21:32