To York and back - A three states mini tour

Just like I mentioned in my previous post, my family is still away at my in-laws so I had to find a way to do something fun during the next two days. The solution was simple - pack whatever is necessary, hop on the bike and ride to York, ME, which is conveniently located within a reach of an average mortal person.

Since this mini tour (I'm going to call it a mini tour because I doubt a 2-day trip qualifies for a bicycle tour name anyway) involved only 1 night at the campground, all I needed to take with me was a tent, mattress, sleeping bag and some off-bike clothes for a change. I didn't even bother to take a rain softshell because it wasn't supposed to rain (and it didn't) or anything warm to wear (no need for it in the peak of New England summer). That made it almost a "credit card tour" (And it would have been, had I booked a motel in advance. But I guess part of fun is to leave something unplanned.) 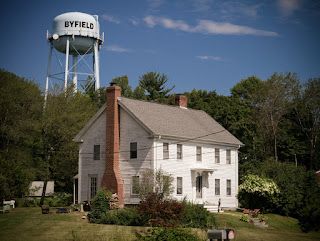 Byfield -  a tiny village on the way to Newburyport. Population smaller than you think.

I started yesterday at 8:00AM and navigating through the morning traffic rush, I quickly left busy suburbs of Boston. Continuing through Harold Parker State Park (I need a separate post about this place at some point), I reached Boxford and Georgetown, arriving just for lunch at Newburyport. I have visited Newburyport several times by bike so far and I always like coming back here. Just in case you find yourself here being hungry, stop by at Port City Sandwich - their grilled Reuben is easily the best one of the kind I have ever eaten. 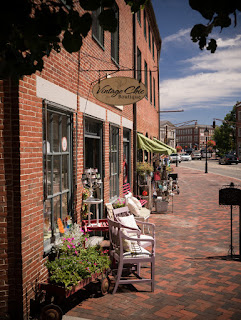 Past the bridge to Salisbury, I was exploring the unknown (and then entering New Hampshire). The ride along Ocean Blvd. is fun, despite heavy traffic in places and lack of shade. But on the other hand, this road has a wide shoulder that can be used for cycling and it's flat as a surfboard (yes, it has a slight curvature) so maintaining 27km/h (17mph) average was nearly effortless. My next milestone was Hampton Beach that turned out to be a place I would gladly avoid. It looked like a Disneyland on a beach. Noisy, crowded, busy. Not my kind of place. 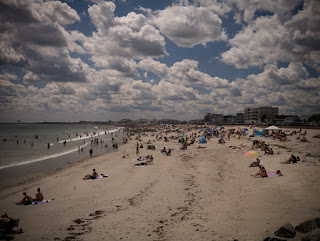 I kept moving and entered Rye, NH, which was exactly what Hampton Beach was not. Rye is clearly a place for people with very thick wallets and that's why you likely won't see any crowds over there. 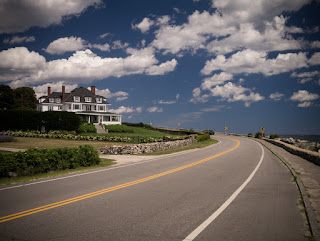 Rye, NH - ocean on the right, money on the left

From Rye, it was just a quick loop around New Castle and I arrived at Portsmouth. It was a time for a quick fuel stop and next I was ready to continue across the bridge over Piscataqua River, entering Maine. 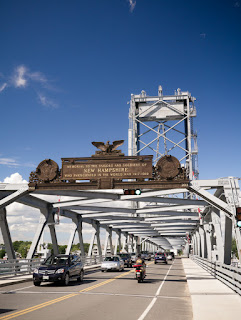 Memorial Bridge. Maine on the other side.

Portsmouth is pretty close to York so my last miles happened quickly. Once there, I didn't forget to stop by at the Nubble Lighthouse, which is supposedly the most photographed lighthouse in the United States. 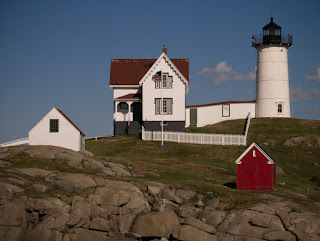 It was about 5:30PM so my priority at this point was to find a place for the night. The campground I scouted online before this ride was full. Full of RVs and trailers size of a medium house. And they were not willing to fit a tiny tent and a bicycle in-between. Silly me - no way to find a vacant campground spot in York in the middle of high summer season. Fortunately, they gave me directions to another place that still had spots available. It was just mile down the road, in the middle of a forest, which means that it didn't have any water view (but not many mosquitoes either). In no time my tent was up. 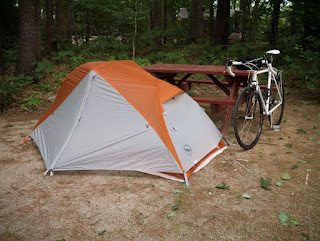 Not a waterfront property but will do
At that point I got curious to check how many miles I biked on that day. To my surprise, it was more than originally planned. Way more. 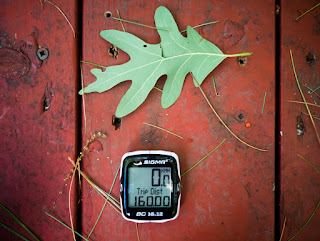 What's more interesting that those 100mi passed easily somehow. I felt a bit tired but not exhausted. Certainly not enough not to bike to a nearby grill place for a pint of Allagash Saison, calamari and Angus burger. Anyway, this 100mi was a very different 100mi than the time I rode to Plum Island and back. Now it seems to me that I did 3 things better this time: I was better hydrated, I was better protected from the sun and I didn't forget to eat before I got very hungry. 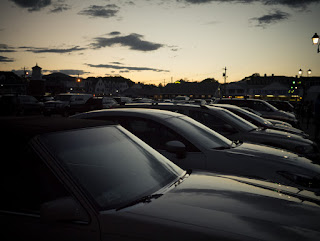 The sun was setting. Let's call it a day.

The next day I packed my stuff and was ready to hit the road by 8:00AM. York was slowly waking up and beach goers were munching their breakfast. That would explain why local beach looked like this: 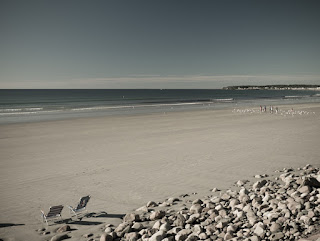 The beach is still there but where are all the people? 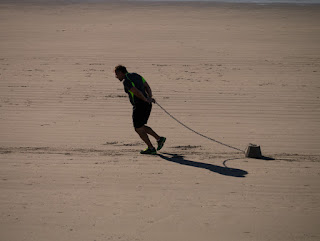 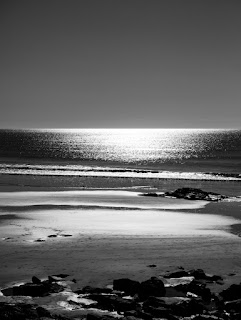 On my way back I opted for a more direct route home, skipping some of the scenic coastal sections I visited on the previous day. Soon I was back in Portsmouth. 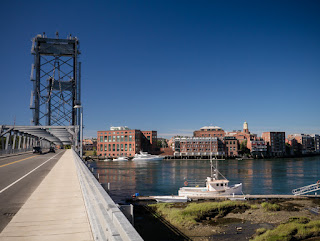 Time to say goodbye to Maine

That was my first longer food stop on that day and once I replenished my energy levels I continued to Moneytown. I mean, Rye. 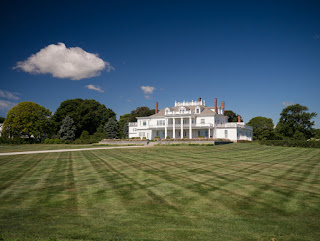 Do all houses on Rye's shore look like this one? Pretty much.

I thought it would be good to arrive at Newburyport by 1:00PM but it all happened so quickly that suddenly I found myself in Hampton Beach (a bit less crazy in the morning, for sure) and Salisbury. I entered Newburyport at noon. Good time for lunch. 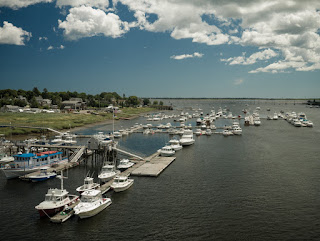 Another Reuben sandwich later, I rolled towards Georgetown and after a few uneventful turns and several less exciting miles (87 to be exact or 140km) I was back home in Arlington. The whole thing was definitely fun and something I haven't tried in a long, long time (high school time, which is prehistory by now). And never with that distance. Makes me think I'm ready for more as long as I find a free week and keep my wife, kids and my boss happy at the same time.
Posted by bostonbybike at 20:53