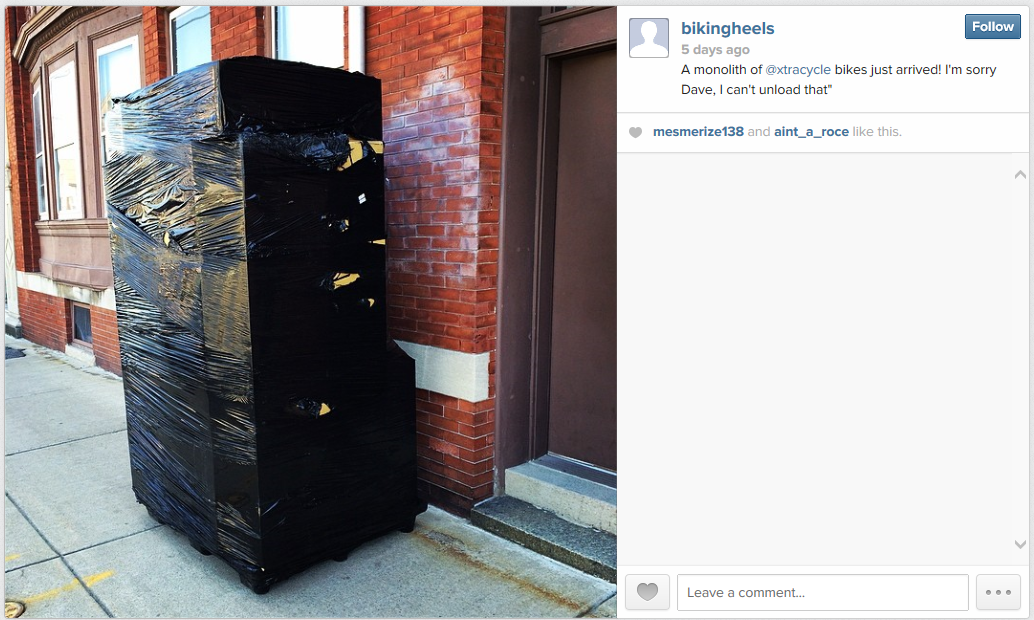 to which my response could only be:

Anyway, all that meant that the last weekend I had a chance to pickup my new family minivan - Edgerunner 27D Family.

I am going to wait with a full review for some time. This bike is so different than anything I rode to this day that it requires some special attention. I need some time to get used to it and I want to be sure that my opinion is presented here as unbiased as possible (Which we all know is impossible). For now, I am ready to share some first impressions.

As my family is growing, I wanted to find some way to accommodate my kids on a bike (or bikes) and not only for those lazy Sunday neighborhood strolls, but also (or maybe especially) for those fully-loaded grocery runs. Fortunately, I have at least 2-3 good grocery stores in my area in a close proximity to the Minuteman Bikeway, which means I can transport my kids to and from those destinations away from the  bike-haters driving on Massachusetts Ave. 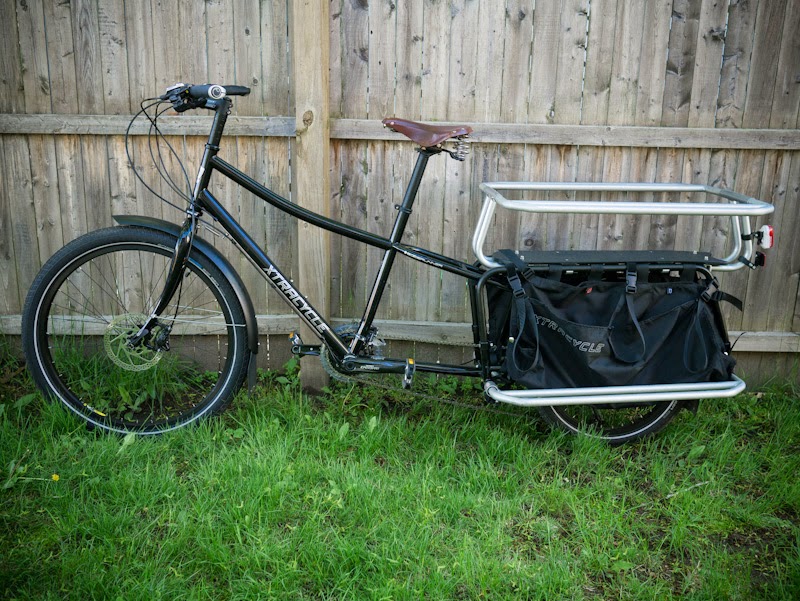 No, Brooks saddle doesn't come with the bike. I took it from my Schwinn.

This turned my eyes towards Edgerunner essentially as soon as it was announced. It took me a while (and multiple short test rides) to figure out which model to buy and eventually I settled for a large 27D Family with fenders (normally an option). It was probably worth waiting until 2014 to get this bike as the new Edgerunners feature a few upgrades, not available on earlier models by default, such as hydraulic (vs. cable-actuated) disc brakes on 27D and the new Flightdeck (the rear rack platform) that is now Yepp seat-compatible without adapters.

Another welcomed option is the Bionx electric assist, now offered on Family and Cargo versions of 27D. I seriously considered Bionx on my bike as this would greatly improve its usability on Arlington's hills, but eventually decided to pass. The Bionx system for Edgerunner costs about $2100 alone, nearly doubling the cost of the bike (yikes!) and if I really feel like I need it, I can always add it later myself. Apparently, there is no benefit in getting it built-in up front (Except that it's already built-in, duh!) as the 27D with Bionx from Xtracycle costs the same as 27D alone plus an aftermarket Bionx kit - there is no monetary savings in having it factory-installed.

So first of all, the concept works. Thanks to the tiny 20" rear wheel the cargo platform is very low to the ground. As we (me and my 3yo son) tested, it greatly improves handling, stability and comfort when riding with children and sitting them on the Flightdeck. No more top-heavy bikes, no more wobbly rides with kids sitting above a large 28" wheel. My son immediately loved sitting on the Flightdeck and holding on to the Hooptie bars (the frame that surrounds the deck). All I could hear from the back was either "Faster, faster" or "Let's do it again".

But aside from that, Edgerunner feels almost like a normal bicycle. I wrote "almost" as I still must remember that this thing is at least a foot longer than any regular bicycle so its turning radius is substantially larger. Also, thanks to the Hooptie and foot rests, the Edgerunner is quite wide - important if you are trying to squeeze through some narrow places. That may actually be a nice safety feature - will now the drivers give me more space on the road?

I think I would compare this bike to riding a mountain bike - it's quite heavy (Although pretty lightweight for a cargo bike!) and on pavement feels a bit slow rolling. However, this is likely not so much due to its weight but because of those 2.3"-wide balloon tires. They swallow all bumps of the road nicely but roll like heavy mountain bike tires despite their smooth tread. Could in reality this bike be a Slowrunner?

That's what I thought until I took the first longer ride (to work on Monday morning). Yes, the Edgerunner can't compare with your road bike but it's not supposed to. It may feel slow but it's not sluggish. My morning commute takes me 40-50 min. - essentially the same as my regular time on a 3-speed Schwinn. This was likely thanks to the gearing. Those 27 gears on the Edgerunner keep the bike going and thanks to the 20" rear wheel it accelerates very quickly. In fact, during my entire ride to work I didn't have to switch from the largest 48-teeth chainring even once. On the other hand, on my ride back home that snail-speed gearing of 26T (front) and 34T (rear) helped me tremendously when riding up the steep 10% grade in front of my house.

I definitely need to spend more time on this bike and try some fully-loaded runs very soon. This time however, I don't have to leave kids at home.
Posted by bostonbybike at 19:57