Another helmet debate. Jan Heine published on his blog, "Off the beaten path", this post about his views on bicycle helmets use.
He's right on many points, but his opinion on helmet use on multi-user paths surprised me a bit. When I commented:

While I 100% agree that it is good to wear a helmet during any sport cycling activity, when risk of falling is higher, I do not think that riding on a greenway, 12mph, away from any car traffic, justifies helmet use,

(...) “multi-use trails” that mix pedestrians, cyclists and dogs on a 12-foot-wide strip of pavement with no markings, then that is probably the most dangerous place to cycle on a busy weekend, and best avoided.

So I started to wonder - are multi-user paths (MUPs) such as the Minuteman Bikeway in my area really THE most dangerous places to ride your bicycle in the city? I mean, if they were, we would see carnage on every summer Sunday when these paths fill up with bikers, dog walkers, children and walkers very quickly. But this, fortunately, doesn't happen. 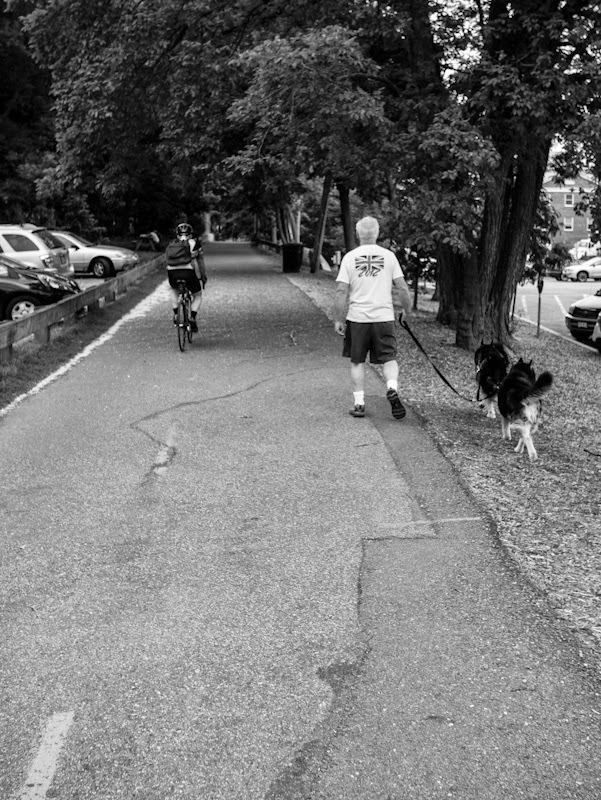 It all comes down to simple physics: speed and mass - energy. When riding on a MUP, I anticipate that others may behave erratically: kids may suddenly run across the path, dogs may walk over to the other side in front of my bike, someone may suddenly stop. Knowing this, I adjust my speed and I never ride too fast to lose control, hence 12mph (20km/h) is absolute maximum speed I would ride with, even though on average it is much closer to 8mph (especially when path gets crowded on weekends). Other users of this MUP travel at similar speed except a few Armstrong-wannabes who think Minuteman Bikeway is a race track and ride well over 20mph. They are potentially endangering themselves and others. Maybe they know about it, that's why they always wear helmets

Riding my bike on a busy city street looks very different. I automatically anticipate that all drivers follow the same rules (leaving enough space for doubt in case they don't) - in this case drivers may actually be more predictable than those kids and dogs on Minuteman Bikeway. However, the speed I travel with is significantly lower than all other vehicles around me. Results of potential collision could be devastating (for me, obviously). On the top of that, drivers always seem to be in rush. Passing a bicycle is something they just can't wait with, so 90% of time they try to squeeze in, even if I don't leave them enough space by riding closer to the centerline. Truck drivers are definitely the worst here. They are well-aware of the mass of their vehicles and in general present "I own the road" personality by passing by much too close. Compared to those busy city streets, riding on a busy MUP is like a walk in a park.

But in the end, everyone should be aware that probably the most dangerous places to ride a bike in the city are those within the door zone of parked cars... or porta-pottys.
Posted by bostonbybike at 20:16