Thinking outside the box - how to keep cyclists safe?

Reading some recent news, I keep thinking that people in Denmark or Holland are clearly delayed when it comes to all this bicycle tech and innovation happening around the world right now. I mean, they are still riding their wooden bakfiets and other old-school bicycles like it was 1920 or something. With so many cyclists in Amsterdam or Copenhagen safety must be a primary concern. And because it's not 1920 anymore, we need to start thinking outside of the bakfiets box. So let's see what the rest of the world can offer to Danes and Dutch.

The main problem with keeping cyclists safe in cities is that they have to share roads with cars and other heavy vehicles. While urban planners in Denmark or Holland tried to solve this issue by closing some streets to cars and building dedicated bike paths, a much better solution has just been developed in England - The London Underline. 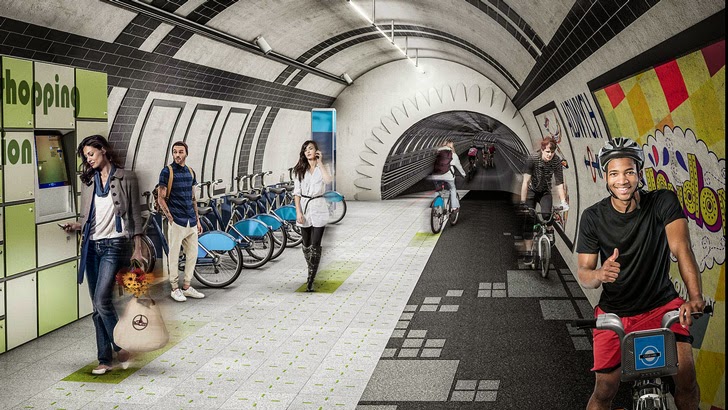 This brilliant idea puts cyclists underground where they stay safe, away from the real traffic. Speaking about the traffic, the article noticed that The Underline would solve London's current traffic problems:

"This could be the energy-efficient solution London has been looking for to solve its traffic problems."

Right - because London's traffic problems are caused by too many bicycles on the streets, so if we move them underground, we will make more space for cars and traffic will flow nicely again. How convenient!
Meanwhile, South Dakota state representatives want mandatory reflective or fluorescent clothing for all cyclists. That's to make them more visible, of course. I don't have data on how many bike collisions happen each year in South Dakota but I'm pretty sure that number is much lower than all car collisions in that state. So why not just paint all cars fluorescent yellow or bright neon pink to keep South Dakota safe? They don't say. Perhaps the Governor of South Dakota doesn't like pink.
Now when we know that in order to keep cyclists safe the best we can do is to put them underground and give them all neon pink vests, is there anything else? Helmets, you may say. Australians, being the most advanced cycling nation in the world are already doing this - 90% of all cyclists in Australia wear helmets (Hmm, I wonder why?). What an example! But what about the countries where cyclists still refuse to wear styrofoam hats? Let's make them wear airbags!

This solution not only offers more protection than an ordinary helmet but looks simple and stylish too, which means that even those conservative Dutch or Danes should like it. And Australians. On a hot summer day.
But I think we should try to see even further. There must be a better way to protect cyclists. I quickly realized that the ultimate solution was developed by the British. For James Bond. I'm talking about that inflatable jacket he used in "The World Is Not Enough."
So there you go - the safest cyclists should ride underground on a bright yellow bike, wearing a neon pink inflatable armor and a helmet. And this is the ultimate solution for Vision Zero.
Posted by bostonbybike at 13:10