It's so bloody hot outside that I started to melt. Once mercury rises above 75F (about 25C) it's the maximum summer temperature I can tolerate. Despite that, I started to wear one additional layer of protective "clothing". Safety first!

It's not a hi-visibility vest though. Those are better suited for people auditing pedestrian and bicycling safety in Virginia. Apparently, walking through the Washington Metro Area is so dangerous that you need a high-vis vest. Without it, there is no way you can survive a day and not be hit by a car. 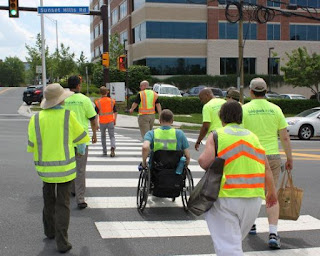 Construction workers on their lunch break. No, no, I mean, DOT workers performing pedestrian safety audit.

But hey, who knows, maybe streets in Northern Virginia are so unsafe indeed? What can we do about it (except wearing hi-vis vests, of course)? Volvo engineers came up with a brilliant idea that their cars will now feature self-parking systems with pedestrian detection and avoidance option. Yes, pedestrian detection is an option. So now your car can park itself, mowing down some people on the way. According to Volvo, their safety is optional.

Ah, cars. We spend our lives in them and car makers noticed that. The long commute is literally killing us so cities try their best to shorten commute times. Or at least they think they do their best.

Just like in Houston, where using $2.8 billion of taxpayers money the city created a concrete monster, widening a 8-lane highway to a 23-lane one. That was supposed to shorten the commute but result is... even longer commute, up by 51%.

Well done, Houston. That's what's called induced demand but U.S. Rep. John Culberson, who begged Congress for money, has probably never heard of it. And I doubt that extra lanes made the new highway safer because we build them too wide anyway.

By the way, is this official then that Houston superhighway beats Burma's 20-lane monster from Naypyitaw? 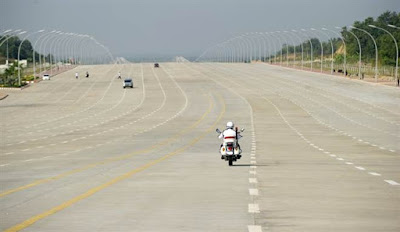 20-lane highway in Naypyitaw. Why, when there are no cars to fill it - you may ask. Because why the hell not - is the government's answer. 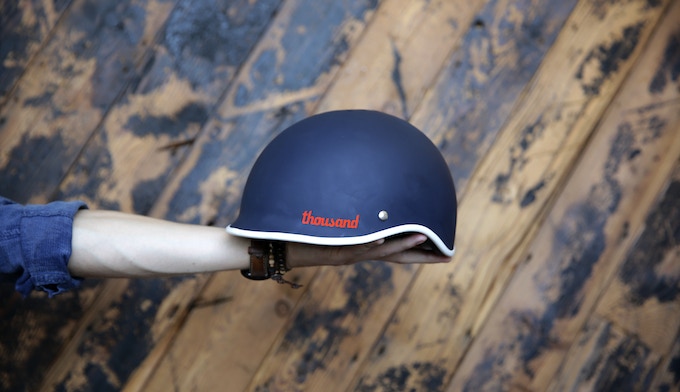 Thousand helmet, aka The Potty

The only safety gear I'm willing to wear in this weather is the protection glasses from my lab. My eyes suffer too much from all that pollen and dust floating in the air and I found out that protective eyewear is actually very useful for bike riding as well. Especially in May. I guess we desperately need some rain to flush that stuff away.
Posted by bostonbybike at 20:15