Thanksgiving - a holiday also known as The Mass Turkey Slaughterfest To Thank All Indigenous People Of America For Showing Us How To Grow Corn, By Giving Them Smallpox.

Anyway, the bird is in the oven so let the celebration begin. Provided that you are able to reach the table first and this might be difficult, as many others got the same idea. This is that time of the year when Americans travel more than usual, which results in a huge clusterfuck at airports and on highways, such as this one in Los Angeles:

Not sure if this was intentional but if citizens of Los Angeles wanted to honor Poland's Independence Day (of November 11th), they are late by nearly 2 weeks. If they had Indonesia in mind, they should've planned for such gridlock on August 17th. On the other hand, there is always huge traffic on 405 so red and white ribbon must be a common sighting there.

My number one rule for going back home from work, prior to any major holiday or summer weekend, is simply not to drive. When roads are clogged with hundreds of vehicles, a bicycle is the only sure way to be home on time. This way no matter how bad the situation is, I know I'll be home at the same time as usual. 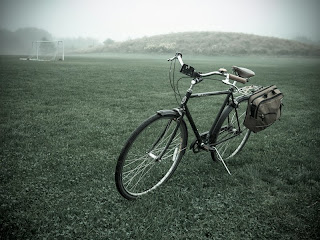 Of course, I realize that not everybody is in such a comfortable situation to be able to ride a bicycle to work, which is why we should definitely invest in public transportation and high speed rail. But we somehow know better, so we would rather spend millions on the extra lane on Interstate that will get clogged shortly after cutting the ribbon. And it doesn't seem that 2017 will bring any changes here. Apparently, "making America great again" means simply "greatly clogged". I wish our government introduced a radical prune juice policy ASAP.

Happy Turkey Day everyone!
Posted by bostonbybike at 23:12