A bag of mixed feelings

I'm sure you have heard about Vision Zero - a noble program to reduce traffic deaths to zero (duh). The victims are overwhelmingly those unprotected road users - pedestrians and cyclists. The culprit - mostly drivers. Many cities in United States adopted Vision Zero, or at least claimed they did. It's because still very little has been done to make streets safer for everyone.


There is number of ways city streets can be made safer. Starting simply by reducing number of cars in the city (congestion charging) to a better street design such as physical barriers that separate heavy car traffic from unprotected road users (e.g. protected bike lanes). In fact, physical separation should be a preferred way, as distracted driving is on the rise. As it turns out, smartphones are killing Americans. Texting/facebooking/tweeting/instagraming has become so addictive that most drivers do that while moving. Starring at the smartphone screen is pretty much as prevalent as disobeying speed limits - even though it's illegal, everyone does it.
You would think that it should be in everyone's best interest to make streets safer for all road users. Unfortunately, there is always a group of idiots who will oppose it. The best example came recently from Minnesota where some people literally "lost their minds over a bike lane". I've seen many weird things in my life but calling bike lanes "Nazi lanes" is definitely new. 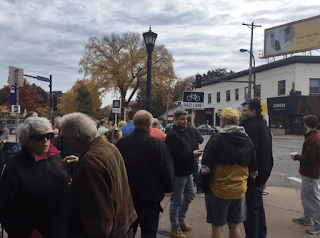 But the worst things happen when the big opposition to Vision Zero comes not from a small group of local retards but a mayor of the largest city in America. Bill de Blasio - mayor of the New York City called for crackdown on e-bikes. I would never think that simple and relatively slow-moving vehicles that harm no one are the major problem to New Yorkers. As was quickly reported, "in 2016 alone, drivers killed 146 pedestrians and 18 cyclists. And in the first two months of 2017, city drivers have killed 18 pedestrians and one cyclist. (...) Meanwhile, e-bike riders have been involved in zero traffic-related deaths during the time that the city has collected data on their use."

This means one thing - e-bikes are not a problem to citizens of New York City. They are a problem to de Blasio, who, just like our mayor of Boston, is likely "a car guy". So either de Blasio doesn't understand what Vision Zero is, or he thinks it means "zero inconveniences to drivers".

Nevertheless, New York remains the most walkable large city in the United States. If only it would protect its pedestrians better, it could likely score higher on "Walkable Communities Report Card" issued recently by National Physical Activity Plan. Unfortunately, most places in America get a solid F grade, but what I found most shocking is this plot: 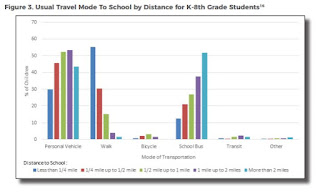 As it turns out, 30% of students in this country are being driver to school by their parent at a distance of less than 1/4 mile! That's a lousy 1300ft or 400m. I can't believe how some people's butts got permanently glued to their car's seats.

Anyway, jumping to another topic, the end of year is coming soon and I have an impression that some towns are trying to spend money they have left before December. In Bedford, I noticed they are building a sidewalk on a quiet residential street that is rarely used by pedestrians. The sidewalk won't connect to anything on one end, because the next street doesn't have a sidewalk either. Not sure if this new sidewalk is really needed.

In neighboring Lexington they started to build a ramp connecting Minuteman Bikeway with Maple St. That's great. There is already a ramp on the east side, but now we will have one also on the west side of Maple St. 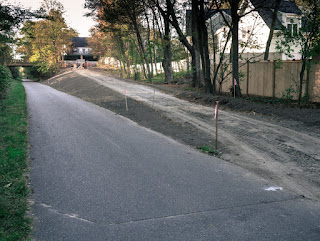 Lexington also started their first "bike share" system last Friday. It's based on Zagster, it has a number of nice, white bikes available from just... one station. That doesn't make it a bike share program at all - more like an automated bicycle rental station. 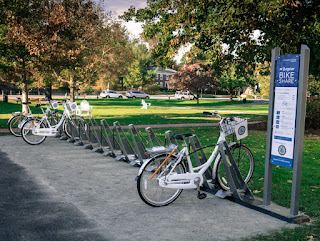 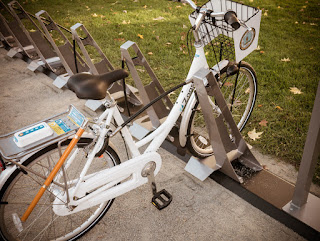 Well, let's hope this is just a beginning and the system will be expanded quickly in 2018. Although, since the Minuteman Bikeway connects Bedford, Lexington, Arlington and Cambridge, I would really like to see all 4 communities working together to unify the system. This will allow people to share bikes and commute from Alewife station or Porter Square all the way to Bedford. That would make much more sense.
Posted by bostonbybike at 13:52