This is old news but last month a woman was killed by an autonomous Uber vehicle while crossing the road. This was the first death on American roads caused by autonomous vehicle and media reaction was bi-fold:


As you can likely guess, I'm in the first camp and I think that while AVs are promising and could help solving some of the problems we're having currently on American roads (such as speeding, driving on red or DUI), they are not perfect and certainly not THE solution.

First, they don't change road use density, still likely carrying only 1 person per vehicle. Next, since you can essentially work inside your AV and not pay attention to road, these vehicles could lead to even larger urban sprawl. Commuting 2hrs to work may not be that bad after all, right?

But I'm also worried about some ideas that came out days after this crash from the camp #2. Mainly, one of them - to require cyclists to wear RFID beacons and thus make them more visible to AV's sensors.

Certainly, small radio beacons installed on moving objects such as bicyclists could make AVs much more aware of its surroundings but it seems like a band-aid solution to what was supposed to be a well-tested technology. What would be the next step then? To put beacons on pedestrians? Dogs?

There is also another very good reason why beacons are a very bad idea. They will serve as a convenient excuse to a kill. In case of a deadly crash media would be reporting it as usual:


"A deadly accident in Boston this morning. Car crashed into bicyclist killing him on site."

Finally, there is this one last thing we tend to give up very easily - privacy. This week, Mr. Sugarhill was testifying in front of Congress to explain why his massive surveillance project called Facebook does exactly what it was designed for.

Radio beacons on cyclists could be used for pretty much the same thing - surveillance. For many of you, this would be non-issue. "I have nothing to hide" - you will say. But I keep thinking that bicycles have always been those "free-range vehicles", requiring little resources, taking you to remote places, moving efficiently and quietly while keeping you connected to nature. And being free-range, I wouldn't want any electronics to monitor me on my bike (even though my cell phone technically already does that). Americans love freedom. They shouldn't love beacons.

Having said that, it's a warm day today. The first one this spring (and it's mid April!). Time for a bike ride! 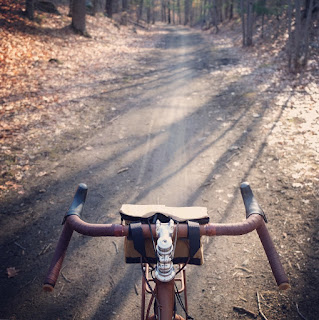 No AVs here. And no beacons needed.
Posted by bostonbybike at 15:15