Sinewave Beacon - not your ordinary headlight

Summer is nearly over, which means days will be getting shorter and if you plan riding your bike through winter you will need a decent headlight.

Beacon by Sinewave Cycles is a highly regarded dynamo headlight among American bikepackers, probably because it's one of few such lights made right here in USA. Plus, it's packed with features such as high power beam delivering a flux of 750 lumens, integrated USB charger, waterproofing, standlight, taillight output and more. Its three LEDs are enclosed in an anodized aluminum shell and there are no plastic parts anywhere in the light, so I'm pretty sure it's up to task of years of use (or abuse) during your bikepacking expeditions.

Backside with external power connector (left), USB charger output (middle) and main on/off switch (right). Two cables coming out of the unit are for the dynohub and a taillight. (Source: Sinewave Cycles)
I imagine if you heard about Beacon the most important question you want to have answered is - is it powerful enough to let you ride on forest trails in the middle of the night? The short answer is yes, but... it depends. If you're used to battery-powered headlights, you may be a bit disappointed. While batteries provide more-or-less constant voltage, dynohubs do the same only if they spin at constant (and high) speed. And here is the problem. I noticed that you can get high beam power only if you move at over 15kmh (9mph). At that minimum speed Beacon was certainly bright enough that I could easily navigate rocky forest singletrack. That is in good agreement with what Sinewave states on their website. Apparently, at over 8mph Beacon provides flux of 500 lumens, to eventually reach max. of 750 lumens at over 13mph.

But once the path you're on gets more technical and you slow down, the beam dims significantly to the point I wouldn't call it bright enough for off-road riding anymore. This isn't really the issue with Beacon but rather a limitation of all dynohubs. Fortunately, this is where the external power input feature comes handy. At this point you can plug in your external battery pack to Beacon and power it that way, basically abandoning the dynohub.

Now, let me tell you about my dislikes because there are a few. First of all is the price. At $350, it's clearly one of the most expensive headlights you can buy and probably the most expensive dynamo light I know. Of course, this high price is somewhat explained by the fact that Beacon is 100% US-made in small batches and that it carries an integrated charger on board. Once you take that into consideration, it's only a bit more expensive than other high-power headlights, but not 2 or 3 times more.

But the main issue I have with Beacon is it's beam pattern or rather lack thereof. According to Sinewave Cycles, Beacon has a symmetrical beam pattern which is an "ideal choice for off-road riding". Somehow, I'm not completely buying that explanation. The torch-like, omnidirectional pattern has no horizontal cut-off, which means that you will always be illuminating the road ahead of you as well as tree tops nearby. Even in a deep forest, I'm not entirely convinced this is a welcomed feature. I would much rather have less light coverage vertically and more horizontally, i.e. a wider beam. Maybe then I would've noticed that deer next to the road that scared me on my last ride. I understand though that it's just much easier to slap 3 LEDs together behind a piece of glass, than design a proper beam-shaping reflector. 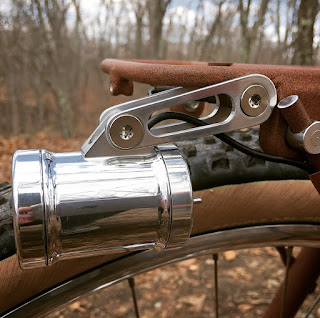 This symmetrical beam becomes a real problem once you leave the dark forest and ride on a bike path. I had a cyclist yell at me "Too bright!" simply because my Beacon was blinding him. On my bike, this presents a major problem. My light is not handlebars-mounted but instead I have it mounted on the front rack. There is no way for me to reach there and cover it with my hand once I see approaching cyclist. Essentially, the only thing I can do is to significantly slow down, which would dim the light sufficiently that it will stop blinding others. However, that's not really a solution I would want to use frequently. I wish there was some kind of low power mode, when maybe only a single LED is on, just to be seen on a bike path and not blind others.

Dislikes:
- omnidirectional beam without horizontal cut-off blinds others
- no low power mode for city use
- expensive?

Who is it for?
Beacon is clearly aimed at off-road riders, bikepackers and anyone who has to ride bikes in remote areas, further from civilization. For such applications, it's nearly perfect. But where it really fails is in-city use. Basically, be ready to be constantly reminded by others to "cover your light" or "turn it off".

I still very much like my Beacon and I think it's great... for what it's designed for. But part of me thinks that it's silly you pay $350 for a headlamp that turns out to be pretty much unusable on a bike path. 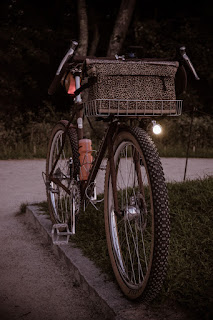