A couple of weeks ago I had to spend  some time in Germany, travelling for business. Even though I used to live in there many years ago, visiting European cities often comes as a minor cultural shock for someone who lives in United States.

One of the striking differences is how much more space in very centers of German cities is designated only for pedestrians and bicycles. Obviously, this is very normal in historical, medieval downtowns, which were not designed for cars and cars wouldn't even fit there anyway. But even in modern urban setting, having entire street just for people, not cars, is something Germans, unlike Americans, are apparently very comfortable with.

The next two pictures are from Frankfurt am Main. This is Zeil - one of the main streets in the city and a major part of it is closed for car traffic. 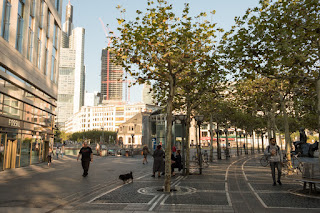 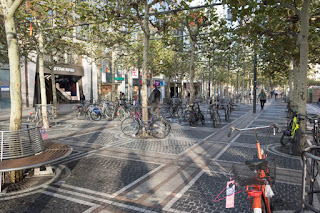 Actually, it's cyclists' heaven too.

Now, keep in mind that we are not talking about closing some narrow, side road for cars. The width of Zeil can be easily compared with New York's 5th Ave. Can you imagine having 5th Ave closed for cars between Central Park and Bryant Park? Or having Boston's Boylston St closed for thru traffic from Mass Ave to Public Garden? I can already see those riots in the streets if both cities proposed anything like that...

Another difference that became immediately obvious was that many Germans in the middle of Frankfurt on their way to work or school early in the morning don't drive. In fact, most of them seemed to either walk or use bicycles: 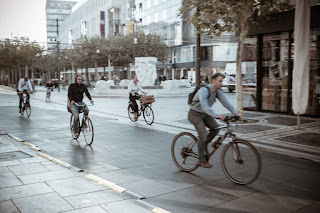 Some guys in their usual business attire - on bikes. 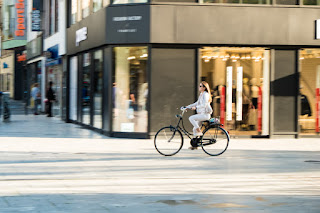 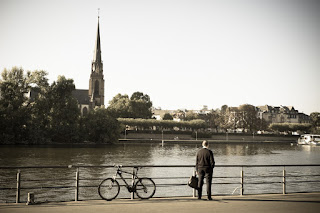 This one stopped briefly to look at the river. 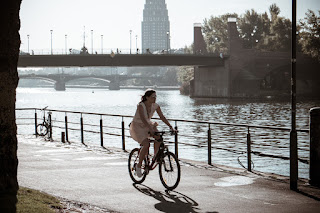 The river banks in Frankfurt are used for walking and cycling. There's no major highway taking that precious real estate - unlike our Storrow Drive here in Boston. 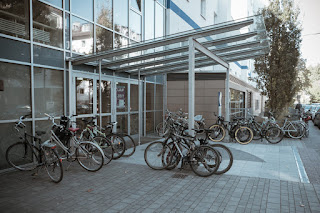 Bikes in front of a school building. Makes me wonder how many German parents actually drop of their kids at school by car? 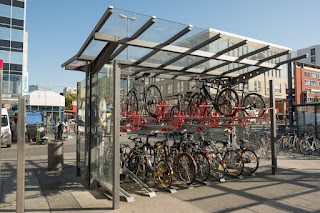 
It's pretty clear that bicycles are a normal mode of transportation in Germany, but what's very interesting is how much more popular electric bikes are. Over a decade and a half ago, when I lived there, electric bikes didn't exist. Now, they are practically everywhere. A good sign of e-bikes popularity is presence of dedicated charge stations scattered around the city. 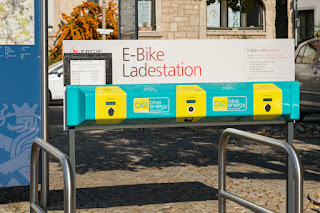 While I doubt we will reach this level of car-free living here in the US anytime soon, it can be eye-opening witnessing how pleasant, quiet, and calm a large city like Frankfurt can be.
Posted by bostonbybike at 11:27