Finally, the future of transportation is here! At least that's what Elon Musk claimed earlier this week. He unveiled his first tunnel under Los Angeles area that apparently will take you across the city at high speed:

Capable of traveling safely at over 150mph. At that speed, it will feel like teleporting within a city.
— Elon Musk (@elonmusk) December 19, 2018


Sounds like the future? Sure! The only question remains - who is this future for? Because the more I learn about Musk's idea the more I realize this isn't the future for most of us.

But let's start from the beginning.

Elon Musk made some big claims years earlier when working on his project and when he started The Boring Company, with the aim to bring cost of drilling tunnels significantly down. And he did just that - building the 6000-ft tunnel in 18 months for just $10 million. That may look inexpensive compared to the cost of other tunnels until you realize that a lot of development cost isn't included in that price and his tunnel is only 12 feet wide, fits a single traffic lane and doesn't have any emergency exits. Looks more like a sewer than a true tunnel to me.

Then there's a problem of capacity. Musk claims his tunnels would be better than existing solutions such as subway, because he will move 4000 cars per hour at 155mph (250kmh). This however, means that a car would need to enter the tunnel every second. Since he's planning on using elevators to bring cars underground directly from parking street level, this doesn't seem probable.

How the fuck would you get a car down into the tunnel every second??? https://t.co/Qa5ZyMd1jw
— Market Urbanism (@MarketUrbanism) December 19, 2018

As many quickly pointed out, a single subway train can hold about 2000 passengers and as such has much higher capacity than Musk's solution. This doesn't seem to discourage Elon Musk. He thinks he's building "something better":


But the most criticism came pointing out that Musk's idea "totally misses the point". And the point is obviously to move people, not cars, through the city.


Elon Musk misses the point: the goal isn’t to move cars, it is to move people. A tunnel for cars just creates traffic chaos at the point of exit and entry - just like expressways. A subway, on the other hand, is a beacon of efficiency in terms of moving *people.* https://t.co/xqsTSYd66x
— Jennifer Keesmaat (@jen_keesmaat) December 19, 2018

Considering the amount of space they require, cars are just very inefficient vehicles. On top of that, they do have a significant impact on climate and are #1 cause of death of young Americans (with SUVs being particularly deadly). 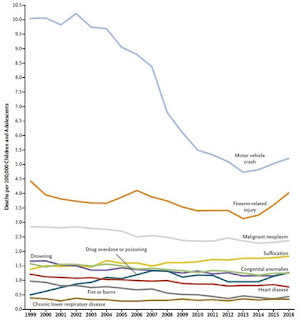 As such, it seems that Musk just didn't do his homework. Or did he? His company sells cars, not subway trains after all, which makes me think that maybe it's all of us who miss the point. Maybe Musk's plan is not to give us the future of mass public transport, but to create a future... for himself (and few wealthy friends). Only then it makes sense to drill tunnels that will take several electric Teslas across the city.
Posted by bostonbybike at 22:17