Summer is over, cooler days are here and at least for me, it's the most enjoyable time of the year to spend outside and ride bike. Unfortunately, my usual day job is keeping me very busy and my kids are back in school. All this means I had little time recently to get back to my regular blog posts.

Anyway, just recently I read a report that "cyclist fatalities have gone up 25 percent across the U.S. since 2010". And "75 percent of these cyclist deaths occur in urban areas", with New York City leading this grim statistics. The major cause of these fatalities are crashes with motor vehicles and that's not surprising since U.S. cities are the "car-friendly death traps".

You would hope that in such case our Departments of Transportation and urban planners would join forces to build a better, safer cycling infrastructure. Unfortunately, after decades of neglect and catering mainly to motorists, there's very little chance for that. 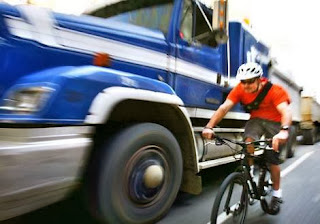 "The future is four wheels, cyclists be damned", writes Jacob Bacharach in his The Outline article. Our cities were basically designed for cars, we prioritize cars and any other mode of transport than driving isn't simply taken seriously, being considered eccentric, at best.

As such, cars became something more than just 4 wheels that take us to destinations:

"The car is a very specifically American symbol of freedom, but like so many instruments and symbols of American freedom, it is a tool of domination and control. A car is a missile and a castle, a self-propelled, multi-ton fortress, hermetically sealed against the intrusions of weather, environment, and, of course, other people. Drivers view the world through the lenses of speed and convenience — most of the anger at cyclists, in my experience, is at having to drive at something resembling a normal urban speed limit because there’s a bike in front of them — but also through the lens of ownership. Streets belong to cars. The rest of us are interlopers, invaders, invasive species."

All this has a sad consequence of treating nearly 40,000 deaths on U.S. roads annually as collateral damage - just a price we need to pay for this "freedom". Almost like, in similar fashion, many agree that deaths in mass shootings are an acceptable price to pay for freedom to own guns.

Of course, there are voices of reason (Michelle Wu from Boston City Council deserves a honorable mention here), coming from people who want to change this tragic status quo. But too often, these voices are silenced by a very loud NIMBY opposition - people who seem to enjoy protesting anything that could cause them a minor inconvenience, in order to make sure life of others won't get any better.

Reading about such situations really makes me think thank God, cars didn't exist when the Founding Fathers wrote the Constitution. Because if driving and free parking were a right, the way owning a firearm is, this country would be completely screwed.

I still have a glimmer of hope though and I hope the tone America's car problem is often reported would change. Unfortunately, blaming the victim and not even mentioning the driver is now the default. We had an example of this recently, when ABC7NY reported the "accident" in which 10-year old Enzo Farachio was killed in Brooklyn/NYC. Apparently, in NYC cars already drive themselves:

On top of that, the initial reporting stated that “police believe Farachio was looking at his phone and did not see the vehicle coming”, implying that it was boy's responsibility to avoid the crash, even though at that time he was standing on the sidewalk, where cars should certainly never drive.

Still, our car culture is so deeply-rooted that when a cyclist kills a pedestrian, we see articles like this one from New York Post:

The author mentions that since 2011 7 pedestrians have been killed by cyclists in NYC and presents this as a major issue, conveniently not mentioning that in the same time frame there were thousands of people killed by drivers. But I guess since "accidents happen", being killed by a driver is something perfectly normal and totally acceptable in this country.

I know that some of you may think that many of these cyclists are scofflaws, running red lights, not paying attention and were simply asking for it. However, even when a cyclist obeys the law, he/she may still end up dead because some idiot driver decides to drive way too fast - an example of which we got recently in yet another Brooklyn crash.
Sometimes I seriously think that the sooner we transition to autonomous vehicles the better. Even though AVs certainly won't solve all problems, they may help at least reducing number of these fatal crashes. And you would be able to legally sleep in your car when driving, unlike this guy in Massachusetts.
What is truly frustrating that whenever a cyclist dies in America, we keep rejecting proven solutions from European countries and get the same stupid ideas again and again. Case in point - New York City is going into a pointless debate over mandatory cycling helmets. 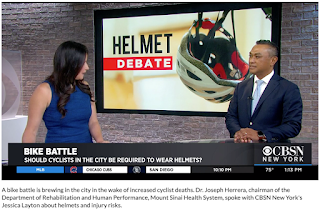 I honestly don't doubt that Dr. Herrera is an expert in head trauma, but he clearly knows nothing about cycling in the city, transportation and helmets in general. He keeps repeating the same wrong statements, just like those who think they know what they are talking about.

Apparently, as the video states, 54% of cyclists killed in 2017 were not wearing helmets and pictures of their crushed bikes were "so awful". This immediately makes me wonder - how many of those cyclists would live if they were wearing a helmet? I suspect not many, since even the best helmet won't save you from being flattened by a heavy SUV.

When asked if mandatory helmets would lead to decreased participation in cycling, Dr. Herrera simply said "I don't think it's the case at all", ignoring all the data we have showing that that's precisely the result and repeating the same, debunked claim that helmets save lives with 80% efficiency.

I wonder if Dr. Herrera is ever going to visit Denmark, Holland or even Germany. He may get into a deep culture shock, being surprised that nearly nobody wears a helmet, yet people don't drop like flies.

It's almost like there's something else that can be done to make our streets safer. Something that doesn't include large, heavy, metal boxes speeding around.
Posted by bostonbybike at 00:06