Once a while, I like to read some news from across the Great Pond to find out how much better or worse the life of cyclists is in countries like Holland, Germany, Denmark or Poland.

Recently, I read a story of a Polish cyclist who got caught by a speed camera for exceeding the speed limit. Here it is for your amusement: 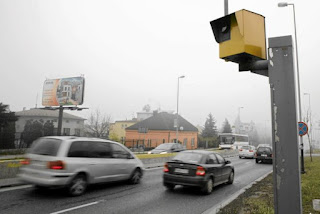 The 18-year old man in northern Poland received a letter from a local Police Department with a 50zl ticket (about $14, but think about it as $50) and a photograph of himself riding his bike. The picture was taken by a speed camera and in the letter the police claimed that his speed was 46km/h (28mi/h), 16km/h above the speed limit.
The cyclist rejected the ticket and decided not to pay it arguing he didn't know what his speed was, since he didn't have a speed computer on his bike. The police response was just plain ridiculous that he should have had a "feeling how fast he was going" and that it should be enough to realize that he was riding above the speed limit. Anyway, his case will be solved in court. I am curious to find out who is going to win, but I have a feeling that police will lose. Here is why:

1. A feeling of speed is not good enough. The cyclist would need a certified speedometer and these are not required on bicycles by law (and those you can buy in your local bike store are not calibrated nor certified).
2. It turned out that the picture he received did not have the measured speed printed on it. Which means that police could not prove that his speed was measured correctly.
3. It is questionable if speed cameras are even designed and configured to correctly measure speed of objects like bicycles.

But the most interesting is - how did they find him? Bicycles have no license plates. Likely someone working at that Police Dept. must have known him. Anyway, it is good we don't really have speed cameras here in US. Who knows, maybe we would get another bicycle law absurd idea and we would be required to install calibrated speedometers on our bikes.
Posted by bostonbybike at 12:52