I touched this topic multiple times here, many others wrote about it a lot as well. Apparently, not enough. Still so many people here in America believe that helmeting every single cyclist on the road is the ultimate goal to road safety. The sad thing is - even those who see benefits in cycling seem to think so.
Yesterday, I found this article on Washington Post by Matt McFarland. The author presents multiple facts that can be summarized simply by "cycling is good for you" and "it's also good for the environment". I guess most of us agree with these statements. However, the story starts with this:

(...) He hopped on a red bike from Capital Bikeshare — which like most U.S. bike sharing services doesn’t offer helmets for riders – and started his commute home. He never arrived.

This is double-tragic: sustaining multiple injuries after being hit by a car but also trying to insinuate that wearing a helmet would reduce these injuries. There is no evidence anywhere in this (and related) article that the cyclist suffered any head injuries.

That's not all. Apparently, according to the same author, "you should always wear a bike helmet" and this gets explained in just one simple chart: 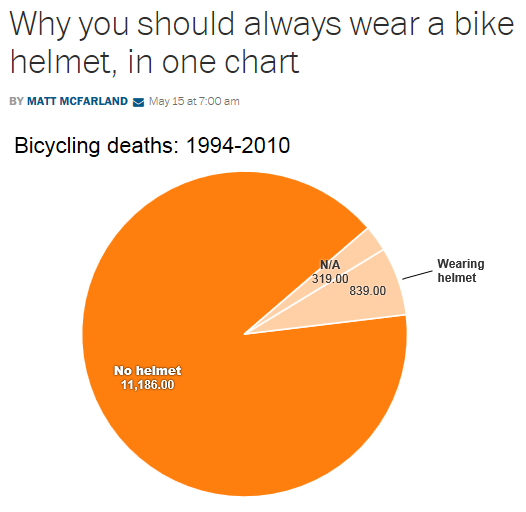 Which the author summarizes as "This makes it about as clear as it can be. To stay out of this pie chart, you need to keep a helmet on your head". Unfortunately, he's wrong. To stay out of this chart you would have to stop riding bicycles but that's not the message Mr. McFarland wants to deliver. He failed to notice that this data is incomplete because it doesn't answer one important question - how many of those unhelmeted 11186 dead cyclists would be now alive if they were wearing a helmet at the time of collision? We don't know. Maybe if they did, they wouldn't just be "out of this pie chart" - they might have as well joined the other 839 helmeted ones. In other words - yes, helmets definitely may reduce sustained head injury but if you think that a helmet is going to save your life when you are being mowed down by a 4000lbs SUV, you really have no imagination.

If you like the above chart, then how about this one: 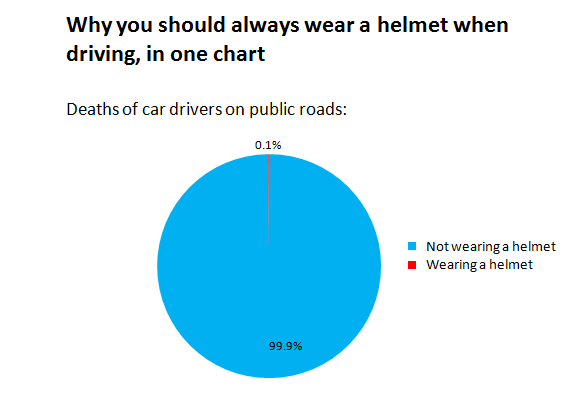 I made this one myself. I don't think it's too far from the truth. I left that 0.1% for those dead drivers who were actually paranoid enough to wear a helmet when driving their cars. As you can see, "this makes it about as clear as it can be. To stay out of this pie chart, you need to keep a helmet on your head" when you drive your car. Not!
Unfortunately, Mr. McFarland is not alone. Many of us fall for this kind of data and accept it without even thinking twice about it. The AAA magazine, Horizons, published recently something like this:

Here we go again: "Statistics show that 91 percent of riders killed were not wearing bike helmets". But how many of those killed had actually a chance of surviving if they wore helmets at the time of accident?
Yes, helmets may help. But they will not reduce your chance of having a collision on your bike (which is statistically much, much lower than having a car accident). And even though Washington Post claims that "the stats on bicycle helmets are abundantly clear: They save lives and prevent head injuries", it doesn't suggest somehow that we should require all drivers and pedestrians to wear helmets as well. While authors are fascinated that 29% of ALL trips in Amsterdam city are done by bike and they admit that "America is anything but bike-friendly", instead of proposing real changes (yes: Dutch-style!), they promote this backwards approach to road safety.
Still going backwards...
Posted by bostonbybike at 13:37