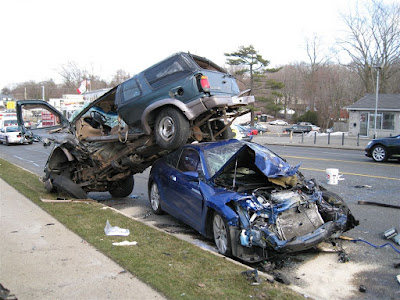 Car crash - accidental or not? (Source: http://powershiftmagazine.com/)
The saga continues. As much as we don't want newscasters to jump to conclusions before all circumstances of a road collision are known, they push back, saying "Not so fast!", because, they may ask: what's wrong with the word accident after all?

The word can also simply describe “a happening that occurs unintentionally.” That seems to be the obvious spirit in which most traffic reports use accident today, and why not? Our justice system distinguishes between negligence and criminal intent for good reason. You could even assert that baked into the prevalence of accident is the fundamentally American idea of “innocent until proven guilty.” Ascribing bloodthirsty motives to a careless motorist feels as problematic as suggesting that she bears no responsibility for the pain she’s sown.

The problem with this word is that it's been overused and applied to every road collision. Accidents are just like cognac. All cognac is brandy, but not all brandy is cognac. Similarly, all accidents are crashes, but not all crashes are accidents.
And when proponents of the status quo argue that they "don’t buy the argument that car accident is always an inaccurate phrase", they fail to notice that it's not what Crash, Not Accident campaign is trying to point out.

Describing the situation as an accident is not always wrong. When a tree falls on your car and kills you, it's an accident because this event was completely random and there was essentially no way you could have avoided it (except for not driving). But when you hit a tree because you were texting or tuning the radio - it's a crash (non-accidental), because it happened due to your negligence.


Unfortunately, it's not how media see these situations now. They are quick to call every crash an accident, which would excuse the driver from any blame, yet they are also quick to report that "cyclist wasn't wearing a helmet" even if it had nothing to do with the way he/she was injured. And that immediately blames the cyclist for what happened.

So now it's time to restore the balance because news agencies do not follow "the fundamentally American idea of “innocent until proven guilty”". They don't blame drivers for "accidents" making them look innocent, yet they present cyclists as guilty, without checking first whether they may have been innocent.
Posted by bostonbybike at 10:51