I remember my first summer in Boston many years ago. I worked in a well air-conditioned building and when I left it to walk across the street to a cafe for lunch, my glasses immediately got foggy from all the moisture in the air. This level of humidity and heat was totally new to me.

Many years later I'm more used to it but I can't say that I enjoy it. Far from it. Every year in July there are days when I choose not to ride my bike because of this unbearable weather. Last Sunday I thought I could take my kids on Big Eddie for a ride but at 95F (35C) air temperature we would probably melt down after just a few miles.

Ok, so I don't like hot weather. Australians probably don't like it much either, because they prefer to drive their kids to school instead of just letting them walk or bike. Hmm... no, there must be another reason why Australians don't bike. Maybe it's because of their mandatory helmet law, push to remove bikes from streets because they are "not safe for cyclists" (That's so Australian - instead of making streets safe, let's just remove bicycles), or the fact that soon they will be required to carry ID (Does it apply to 8-year olds riding their bikes to school?).

It must be all of these things plus lack of any action and funding of bicycle infrastructure. So it seems that things look pretty bad for all cyclists in Australia and the situation won't change any time soon as there are too many idiots at power (The prime example comes from their Minister of Transport, Duncan Gay). Sad.

But let's leave Australians with their own problems. Unfortunately, things are not much better here on the northern hemisphere. We may not be as baby-sited as Australians cyclists but we are not safe either. We can be killed by running over by a police officer, struck by a car door or being impaled on a fence. That's tragic. 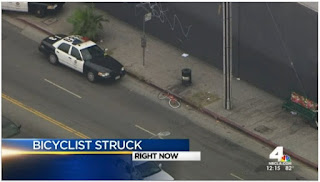 "He came out of nowhere!"

What's also tragic is the way these news are brought to us. If you read through these articles you will see that the police officer hit the cyclists because "he came out of nowhere", the cyclist "slammed into the door" and died of sustained injuries and while the other one got impaled into his neck, the most important thing to check was "whether the cyclist was wearing a helmet".

So all is good, right? Those were just accidents and we can now move on. It was an accident the officer hit one cyclist and an accident the door popped up in front of the other one. No one is to blame, maybe except the cyclist in case he/she wasn't wearing a helmet.

Fortunately, there is a (still small) chance we will stop calling these situations accidents and call them what they really are: crash, collision, etc. But in order for this to happen big media must change the way they report news and eradicate "accident" from their dictionary. That surely won't be easy. People behind "Crash is not an accident" campaign want to change it because words do matter. 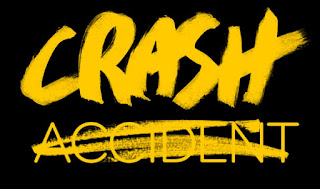 Crash, Not Accident
Posted by bostonbybike at 23:26