Last weekend Wheelworks in Belmont together with Salsa Cycles organized another a Demo Day - the annual event where you can ride a Salsa bike of your choice, for free. Last time I tried it, I rode Salsa Beargrease XX1, which was the first time ever I had a chance to ride a fatbike. This year's Demo Day was also dedicated to fatbikes and I was equally excited about it since Salsa's offerings in this market have changed substantially this season.

I'm not sure how to describe what fatbikes used to be. They originated as rugged, non-suspended mountain bikes with a bit of touring heritage. For example, they featured longer chainstays for better stability, steeper head tube angles for more agile steering and rack mounts. Not anymore. Today's fatbikes are essentially mountain bike's replacements. They look and feel more like trail bikes with their slack head tube angles, short, agile chainstains and suspension forks. Gone are the rack mounts (a mistake, in my opinion).

Anyway, the choice of this year's Salsa bicycles was limited to Blackborrow SUS GX1, Beargrease Carbon SUS X01, Bucksaw X01, Mukluk SUS GX1 and El Mariachi GX 2x10 - they only non-fat bike in the group. Because I rode Beargrease last year and Blackborrow looked a bit too extreme for my taste, I picked the Mukluk as my steed for the ride. 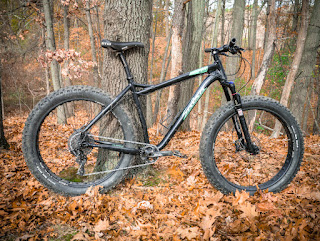 The first impression of the new Muk' was certainly positive. The machine feels solid and looks like it would be fun to ride. Mukluk SUS GX1 comes with a 100mm RockShox Bluto fork, 1x11 SRAM drivetrain, Guide hydraulic brakes and some pretty (and quality) Thomson components. These are built around a new aluminum frame with trail bike-like geometry. A big change this year are also the new wheels, featuring Mulefut SL tubeless-ready rims. The bike wasn't set up tubeless but such conversion should be trivial, having all components prepared. 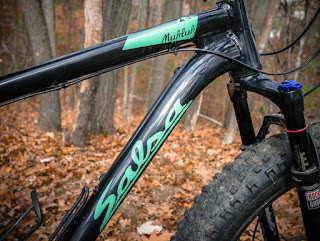 First, using a luggage scale I weighed the bike at exactly 15kg (33lbs) for a 20" frame I used. This wasn't surprising. I was expecting it and it's not low weight by modern standards. Surprisingly though, I didn't feel this weight at all on my ride. Mukluk rolls over rocks and roots with ease, climbs effortlessly and except those situations where you would have to shoulder your bike and carry it for an extended time, you shouldn't be bothered by its weight. Which doesn't mean that it wouldn't hurt if it was lighter. 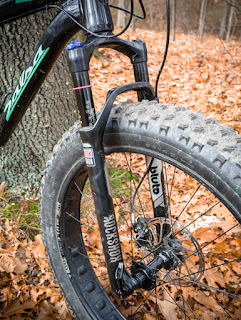 I wasn't too excited about the addition of a suspension fork to new Salsa's fatbikes. Last year when riding Beargrease I never felt like I needed it and this year my feelings were essentially the same. It's probably nice to have those 100mm of travel available and it's certainly useful in some situations. But honestly, with 4" wide tires I could skip the Bluto fork and ride rigid. It may be due to my riding style. I'm likely not challenging this bike enough, given my limited mountain biking experience. 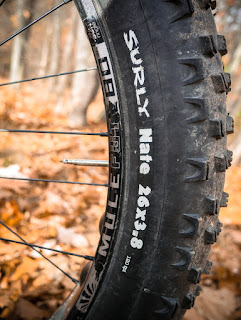 I would have to try the Blackborrow next time, or another bike with 4.8" tires, to tell whether my feelings are correct, but so far I think that 3.8" tires on Mukluk or Beargrease are a perfect balance between something really, really wide that provides much more grip and flotation over rough terrain than regular MTB tires, and something ridiculously wide and heavy. Wider, 4.8" tires are likely going to be very useful only in certain conditions such as very loose sand or powder snow. That's only my speculation, of course. 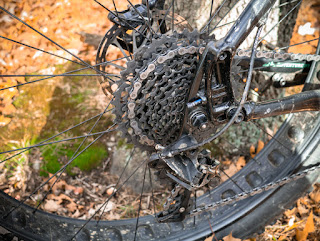 Regarding the gearing, there is not much to say here except that SRAM 1x11 works very well (no surprise). It was the second time I rode a bicycle with such configuration and I liked it on Muk' as much as earlier on Beargrease. The MTB SRAM shifters are clearly different than Shimano Rapidfire I'm used to but they seem to be equally comfortable. However, I can't say the same about SRAM's road DoubleTap shifters, which I find unintuitive and inferior to Shimano's STIs.

Overall, the new Mukluk is a very nice bicycle and it clearly fits well into Salsa's fatbike lineup for 2016. There are a few things I find puzzling though. From now, all Salsa's fatbikes are essentially mountain bikes. They lost their touring, or bikepacking heritage. There are no rack mounts anymore (even though rear rack installation is still possible with some gimmicks). Also, I have a hard time telling the difference between Mukluk X7 and Beargrease X5. They are relatively minor - some components are different but both bikes have now the same frame geometry. In fact, while Beargrease used to be a sports/racing/performance fatbike, Mukluk was always the choice for bikepackers and travelers. But now these two bicycle lines got so close to each other than we may see them blend into one, in 2017. We will see.

No matter what, you will always have fun riding one.
Posted by bostonbybike at 11:00