Long, long time ago, city streets used to be full of people walking everywhere. The streets belonged to them (and streetcars, horse carriages or bicycles). Cars, however, were as rare as pink elephants and as such, things like crosswalks, street lights or speed limits didn't exist. 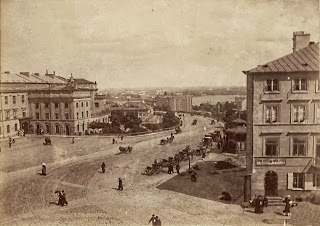 Cities before times of Ford Model T and its siblings used to look like this.

But then thanks to guys like Benz, Diesel, Dunlop and Ford things got really screwed up. Well, no, no. To be fair, cars play an important role in modern economy so we can't blame Benz or Ford for the technological progress they enabled. Nevertheless, things did get screwed up. Adam will tell you how that happened:
Why jaywalking is a crime - by Adam. You can also watch the full episode here.

There you go - cars needed space, so people got pushed off the streets onto sidewalks and they wanted speed, so crossing the street in any place and at any time you want became no longer possible. Not to mention that arrival of (many and always more) cars in U.S. cities meant death of well-developed streetcar networks. We could blame car manufacturers (and we should) for this situation, we could blame government for the lack of oversight, and urban planners for no vision.

But being limited to walk on the sidewalk and crossing the street in designated places only, is just a part of the problem. The other, and a worse one, is that jaywalking is (still) a crime. Apparently, it can be such a serious crime in this country that it requires 12 police officers to pacify the situation:
But wait, there is more! As you can learn from this article, those guys who got brutally pacified were crossing "a street that had been barricaded and closed to car traffic". Yep. In this country you can be arrested for crossing an empty street with no traffic at all! But only if you are either Hispanic or Black "because two of the five people crossing the street in the group, presumably lighter-skinned, were not detained". Shame on you Austin police. I thought that in 2015 such obvious racist behavior would be a thing of the past.

Unfortunately here, closer to Boston, things don't look any better. In New York cops just love to ticket jaywalkers. No wonder - fighting such petty "crimes" is by far the easiest and fastest way to improve statistics. Are the streets getting safer that way? No, but it doesn't matter. It looks nice on their monthly report though.

Sometimes, things get way out of control. Just like when Kang Chun Wong, 84, was beaten up by the police to submission, when he was stopped for jaywalking. Now, he's suing their asses for 5 million bucks. I hope he gets it. I know it's New Yorker's (taxpayer's) money and NYPD won't likely pay a dime. But maybe a few more actions like this one and people will wake up asking who's actually being "protected and served" here?

There is one more good reason why strict enforcement against jaywalking (let's start calling it "freecrossing") is a very bad idea. I will give you an example from Poland - the country I visit once a while. Things look as bad there as they are here in the U.S. Police simply loves ticketing pedestrians crossing streets "illegally".

Why is it bad? Over the years of such police action, it simply made people less aware. People stopped to think. "Hey, the green light is on! Let's cross the street. But what if there is a motorist running a red light approaching? Never mind, we need to cross. It's green!". I've seen it multiple times. The green light comes up and people rush across the street not looking for any cross traffic. Why? Because they were taught so. They were "educated" by police that crossing an empty street where there are no cars approaching is bad, if the light is red. But crossing it when the light is green is good. So, trusting the lights, they cross in rush, not checking for any cars on the road. You may not see it as a serious problem but I would rather live in a city with thinking and aware citizens and not those controlled by street lights.
Posted by bostonbybike at 23:45