The indifference of innovation

I have been taking part recently in an interesting discussion about bicycles offered in the general, popular market. It all started when I learned about a new bicycle manufacturer, trying to get a slice of the crowded space in the business of low-cost, budget bicycles (sub-$700).

While I realize that in such price range, there is not much room for any R&D and it may be difficult to be creative given limited resources, my biggest complain was that all of those bicycles looked pretty much exactly the same as many others, offered in this category. In other words, except of colors, minor differences in components and price, everything else was essentially the same. This makes me think that the company's strategy was to compete mainly on price, as they made no effort to offer anything original or at least, design-wise, a bit different than their competition.

The answer I heard to such argument was that this should come as no surprise, as all popular bicycles sold by leading manufacturers are nearly the same because "that's what people want". Really? Or is it exactly the opposite?

Leading bicycle brands offers are nearly the same because they simply copy each other, not trying to "reinvent the wheel" as this is too resource-intensive. They would rather follow the safe route and react to market demands, rather than trying to create that demand in the first place. This way if Trek makes a new road bike with fatter tires and disc brakes, Specialized will soon have one too, but only after both companies realize that there is enough money in this new niche. This makes me think - who is pushing all the innovation now - leading top-sellers or someone else? 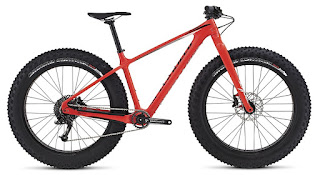 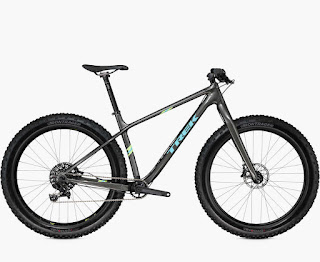 Specialized Fatboy (top) or Trek Farley (bottom)? No matter, they are practically identical.

Some examples immediately come to mind and while they are not in the budget price range, they seem to tell us the story:
Somehow all this makes me think that despite having plenty of resources and money, largest brands often prefer to take a safer R&D route and are afraid to try something new, sometimes seemingly completely insane (think - the first fatbike from Surly). It's the smaller market players who, despite limited resources, try to stand out in this crowd and are less afraid to push through some unconventional ideas. This may not be a general rule, but it certainly seems to be often the case.
Posted by bostonbybike at 22:50