And now for something completely different - road safety

Road safety - a subject we all find important, yet it gets completely neglected. Last year 38,300 people died in collisions involving cars in United States. Unfortunately, it's just a number because nobody seems to care. We think of those deaths as "acceptable loses" and as such we take no action (or too little action).

But imagine that this translates into nearly 3,200 people dead every month, essentially being a road equivalent to 9/11 tragedy happening every month, every year. Or even better, imagine an airplane full of passengers crashing every 3 days somewhere in United States, with everyone of 300 passengers on board dying in a horrific crash. You would be petrified of flying, won't you? And the government would certainly step in to investigate. Yet, this is exactly what's happening on our roads and nobody cares. It seems that we need our cars like air to breathe and even if this air is slowly killing us, we still inhale.

A major part of this problem is simply our reliance of cars. Compared to other developed countries, we simply drive too much. Lack of other options (notably high speed trains and a very limited public transportation in major cities) means that we often have no choice but to drive. And die. While there's been a slow decline in motor vehicle deaths annually in the United States, the number has fluctuated around 33,000 for the last decade. Last year's spike to over 38,000 deaths could be attributed to lower unemployment rate and cheap gasoline that let Americans drive more.

But even if you still decide to ignore this problem, chances are that you are a parent and I know no parent who would say that safety of his/her children isn't important at all. That's why when they are infants, we make sure they sleep in an empty crib because a fluffy pillow or a soft blanket could result in an unintentional suffocation. When they grow up a bit, we pay attention that they don't fall down the stairs or drown in a pool. But then, they go to preschool and we drive them there in a car, not even realizing that statistically-speaking, this is the worst danger we can expose them to at that age.

"But they sit in their car seats!" - you could say. Unfortunately, car seats don't help that much. Despite their widespread use, still over 6500 children die on U.S. roads each year. That's actually much more than deaths by drowning. As with nearly every other danger, the best strategy is to simply avoid it in the first place, which in current situation means one thing - drive less. That would be a logical solution, yet no organization or government agency recommends that.

Instead, since here in America we pretty much have no choice but drive, we adopted a different "solution" to this problem - minimize loses (injuries) by requiring car seats. Does it remind you of something? Bicycle helmets! They are often seen and promoted the same way - as a "solution" to minimize injuries pushed on the unprotected road users (cyclists). The real solution - avoidance of danger in form of a separated cycling infrastructure is usually neglected. This way car seats became the same thing for parents as helmets for cyclists. 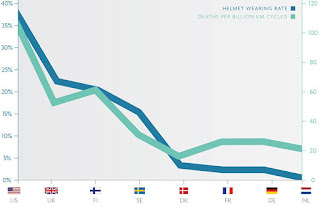 Helmets, car seats and high-visibility clothing - all fall into the same category. They push responsibility of staying safe onto victims of road collisions and take our focus away from the real issue. And that issue is with all of us - drivers. We are the ones who break law every day (don't tell me you never drive over the speed limit), don't share the road, always rush, get impatient, fail to notice others and not give way. Some say that replacing drivers with driverless cars is the ultimate solution:
Unfortunately, it's not that simple. Driverless cars may be coming to your neighborhood soon (They are coming to Boston too.), but they come with their own problems. An autonomous vehicle (AV) can be programmed to communicate with other AVs and as such, can effectively avoid most dangerous near-crash situations that are usually attributed to human error or negligence. This could mean (as shown in the video above) that AVs will drive closer to each other, perfectly maintaining the distance between cars. A constant flow of high-speed vehicles? It's the traffic engineer's dream! And a nightmare to all others. If you don't see it, try being a cyclist or a pedestrian in a city filled with tightly-packed, high-speed AVs. Crossing a street could be harder than ever.

As long as we keep our cities filled with single-occupancy cars, whether they are driverless or not, we will be stuck in the same traffic as we are now. The streets might get a bit safer when driverless cars show up, but will they be livable?
Posted by bostonbybike at 10:53