Thinking more about my recent bicycle tour of northwestern Vermont (1, 2, 3), I decided to discuss here some new things I learned on that trip.

First of all, the whole concept of bicycle touring is not exactly foreign to me. Neither is camping. The only problem is that the last time I did a multi-day tour by bicycle was about... 20 years ago. Since then, everything in bike touring world has changed, except maybe the fact that wheels are still round.

I dug through the Internet to find some more up-to-date information on how its done now and one question immediately popped up - do I really have to take so much stuff with me? Most of the people who presented their touring setups were packing so much junk on their bikes that they could likely traverse Sahara twice before running out of supplies. Some of their choices were really puzzling. I can understand taking a laptop computer on a multi-month-long tour if we are planning on doing some remote work as well. But how about a camping chair? Or a 10mm hex wrench (found in a packing list of one well-known bike tourist). What is he supposed to do with it? Whack a bear in self-defense maybe? Not to mention... "50 feet of nylon cord for hanging food". Seriously?

Anyway, it all looked like a completely wrong approach for someone who doesn't plan on riding through Australian outback alone, but simply spending a few days in rural New England. The solution was to go ultralight and if you want to understand what it means, you need to visit the website of this guy from Slovenia who pretty much redefined ultralight bicycle touring and took it to extreme. While I definitely wouldn't go that far in reducing number of grams (sacrificing my comfort) I would be hauling with me on a tour, many of his ideas make sense and were perfectly applicable to my situation.

The main advantages of ultralight touring are:
Now that I explained the basics, let's see how it worked in practice.

First of all, the distance I picked to travel every day was pretty much spot on, which means I know myself and my capabilities pretty well. In general, if the route is flat I can comfortably ride 140-160km (up to 100mi) a day (More won't work because I want to stop frequently to see things, not just ride by them). If lots of climbing is expected, I would shorten it to max. 120km (75mi) a day. It also depends on the time of the year and available sunlight, plus how much time I expect to spend looking for a suitable place to camp. On a "credit card tour" that doesn't involve camping, I could certainly ride a bit more. 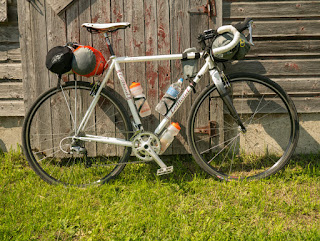 Next, my packing setup worked simply great. I carried all small items (cue cards, lenses, wallet, phone, chargers, snacks, keys, cable lock, etc.) in the easily-detachable Apidura Pocket bag. It was then attached to the Apidura Pack handlebars bag, which contained my sleeping bag and a small pouch with few cosmetic and first-aid items. The camera traveled in the Apidura Food Pouch mounted on the top tube. The rest of my gear (tent, sleeping pad, ground sheet, clothes, some food, tripod, tools and spares) were bundled in two stuff sacks, placed on the rear rack and secured by a single bungee cord.

For a moment I questioned the necessity of taking a rear rack at all and using a saddle bag instead (essentially what bikepackers do), but then I realized that this setup lets me pack things faster, easier and better. It would definitely be difficult to fit the whole tent, pad, clothes and tools into a standard saddle bag. Weight-wise, my rack setup is still lightweight at 530g (rack + both bags + bungee cord) thanks to a very lightweight rack (Soma Mini Front Rack, $25, 369g). That's about the same as a large canvas saddle bag that fits less!

Regarding the bicycle, it performed perfectly thanks to adequate gearing. I used a 44/28T crankset with a 12-30T, 10-speed cassette. If I was about to change anything I would likely go with a 11-speed, 11-32T cassette instead.

I checked the weather forecast before leaving and noticed that air temperature was supposed to drop to even 9C (48F) before dawn. Being uncertain how comfortable I would be in my ultralight summer sleeping bag, I packed an extra woolen long-sleeve shirt. This proved to be the only clothing item I didn't use, so overall, I think I made some right choices. I didn't even pack a rain jacket because it wasn't supposed to rain. And it didn't.


Bringing an extra water bottle was also a good decision. I used King Cage Universal Support Bolt to install a third bottle cage on the downtube and I have to say that for long rides, especially in the summer, it's a very good idea to take more water. It simply means less frequent water stops, more riding and less worry about resupplying in general.

My camping setup performed flawlessly. I'm very happy with Big Agnes Copper Spur UL1 tent, although I wished its poles could be packed into a shorter bag (i.e. they would have to fold more somehow). I had no issues with the sleeping pad (NeoAir XLite L) and the bag (Sea-To-Summit Traveller Tri L). For summer camping it's likely all I would ever need.

A new accessory piece I rode with was the tripod, Tamrac TR404 ZipShot. It's a very lightweight (278g) and ridiculously cheap ($16 with QR plate) support for compact cameras that uses the same system for its legs as tent poles. This means after undoing two rubber straps it opens up by itself in ~2 sec. I have never even considered taking tripods on a long bike ride before, due to their weight, but ZipShot is so compact and lightweight that it's definitely worth carrying - not just to take pictures of yourself but also for those low-light conditions. 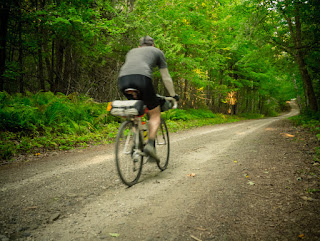 And what didn't work:

My biggest problem on the tour was electric power. I took 2 charged batteries for my camera and a charger but only used 1 battery during those 3 days. Next time I will know not to take the charger, unless I would be traveling for more than 5 days.

Phone power was much more problematic. Unfortunately, smartphones have notoriously poor battery run time, even after disabling most apps an Wi-Fi, which brings up the issue of recharging the phone daily. The best would be to plug it in at a campground, but if we wild camp, it's not an option. I tried to recharge it a little bit at every longer stop I made (lunch or breakfast break, etc.) using outdoor outlets found on most buildings. Unfortunately, I made a huge mistake taking a combo charger. It charges the camera battery and another USB device at the same time. Works great as long as you can plug in the USB cable into the single USB port on the side of the charger. The outdoor outlets always have a protective plastic cover installed over them, obstructing charger's port. Next time I will certainly take a separate, smaller phone charger with me.

I packed all my clothes into a single Sea-To-Summit Ultra-Sil stuff sack that I bought years ago. Now I see that this kind of bag is designed for backpackers, who would then place it inside a backpack. The fabric is simply too thin to survive constant rubbing of a bungee cord and rack tubing. My stuff sack developed a few tiny holes after only one day of use.

Another bag that left me with mixed feelings was the Apidura Food Pouch. As I mentioned earlier, I use it as a camera holster, not a food bag. It works great but unfortunately it's too small. It just snugly fits my Panasonic camera with the shortest lens. I will certainly be looking for something larger because the whole concept of keeping the camera ready to shoot in a slip-in holster on the top tube is great. The Food Pouch though will likely work better with what it was designed for - food.

Finally, there is the issue of camping or the "where to camp" problem to be exact. Unfortunately, most campgrounds are full in high season, which means that those enormous RVs and motorhomes occupy most space. Then, for some reason (legal regulations?) campground owners are unwilling to fit in a tiny 1-person tent and a bicycle even though both take much less space than one parked car. Obviously one solution is to make reservations prior to going on a tour but... it's not how it's supposed to work. This ties us to camping in a certain place on given day with no flexibility at all. As a result we lose part of that travel freedom we look for when going on a bike tour.

That leaves us with wild camping (also called stealth, primitive, etc.). In theory it looks great - just camp somewhere where you won't disturb anyone and leave no trace. However, I found out that it may work great in very remote areas somewhere in Montana, Utah or Oregon. But in more urbanized New England wild camping can often be tricky.

As such, I have no good solution to this issue, except maybe touring outside of high season for greater camping availability.

That's about it. The tour was a success not counting the lost polarizer filter that I dropped off a bridge into a river below. Fortunately, nothing failed and the only time I had to use my tools was when one cyclists asked me to tighten handlebars on his bike.

Looks like I will have to try to make a short tour an annual event. 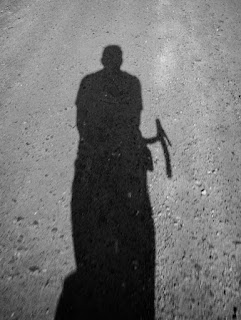