War of the worlds - can bikers and drivers coexist peacefully?

Since I don't live in Holland nor Denmark and I can't enjoy riding on bike lanes on my way to work, I have to share the road with many town residents every day. Yes, some of them get a bit too close to my bike but in general, I never had any problems with vehicular cycling. Maybe this is because I don't ride on our main street - Massachusetts Ave. Apparently, this is the place of most bicycle-related crashes in Arlington. This is how it looks like: 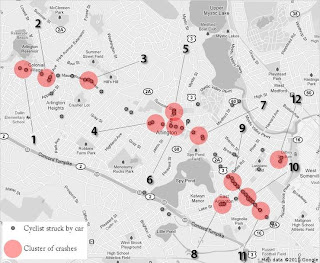 There are several reasons for these crashes but most of them can be narrowed down to either the cyclists or drivers not obeying the law. I don't want to get into the whole discussion on who's wrong and who's right, but there should be a way to satisfy both sides of the equation at the same time. Ideally, we would want these two groups coexist peacefully and do their thing without interrupting each other. This could be done one way - by designating some space on Mass Ave for bike lanes. These lanes would keep both types of vehicles separated and would increase safety. Unfortunately, it looks like most of Arlington residents don't like this idea: 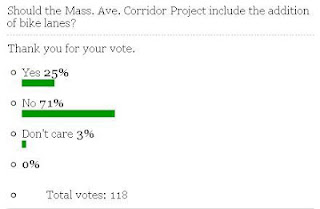 I am not surprised by these results since in order to make space for bike lanes, the Mass Ave Corridor Project plans to reduce the number of traffic lanes from 4 to 2-3. And this is a big no-no for most of the residents of this town. I thought about it recently and figured out that if a single traffic lane is about 11' wide and a parking space is about 7' wide, we should be able to fit 4 traffic lanes, parking spaces on both sides, and two 3'-wide bike lanes with 2'-wide door zones on both sides of the street. Sure, this will make the parking space a bit tight, and bike lanes are not going to be like those luxurious Dutch bike highways, but if we never compromise on something, we will get nowhere.

Most drivers will still disagree. I realize that they will prefer the status quo when they "share" the road with cyclists. Unfortunately, that "sharing" often means getting too close to passed bicycles and forcing them off the road. Bike lanes would make it safer for everyone. Safer for cyclists to ride on Mass Ave and easier for drivers to drive as they will not be slowed down anymore by bicycles in front of them. And there is a chance that more people will realize that riding a bike is safe and will leave their cars at home. This will further the reduce road congestion making driving to work faster and less stressful.

Can we coexist peacefully?
Posted by bostonbybike at 13:54