My brother has always been a much more aggressive biker than me. He proved it early, when he was only a few years old. My aunt got a bike for my cousins - a kid's tricycle (Or was 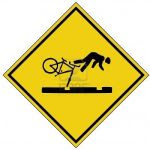 it a quad?). The bike had two small rear wheels with a long axle in between and a fixed chain ring welded to it. The bottom bracket with a single-piece crankset was welded to the bottom of the bottom tube. The first thing my brother did was to jump on pedals so that the entire crankset and bottom bracket fell of. Now, keep in mind that in 80's in Poland you couldn't just go the store and buy any bike you wanted. The supply was very limited so you were happy to find just anything. My father couldn't just get a new one, so he had to find a welder to fix that bike for my cousins.
Much later my brother got his first more serious bike - a small-frame road bike (similar to mine but with a proper diamond frame). He then crashed it into a car and the bike was scrapped. He survived.

A few years had passed and my brother got a shiny mountain bike. He broke the frame several weeks later.

Then, when we were mountain biking in Austria he had an OTB accident. The first thing he did once he got up from the ground was to check if his beloved Marzocchi Bomber survived. It did. The helmet did not (It broke into tiny bits.) but it saved his skull. He ended up with some skin torn on his face, arms, and legs. I can't even count how many frames and rear derailleurs he ruined.

He has a new shiny mountain bike now. So I guess we are waiting for more action.
Posted by bostonbybike at 09:58