Another 14 Kickstarter inventions for your bicycle

There's been a bunch of new projects surfaced on Kickstarter and while some of them look quite interesting, others just beg to ask "why?" or "what for?". If you enjoyed the first part, read on. Let's look at them one by one (in no particular order):
Noke 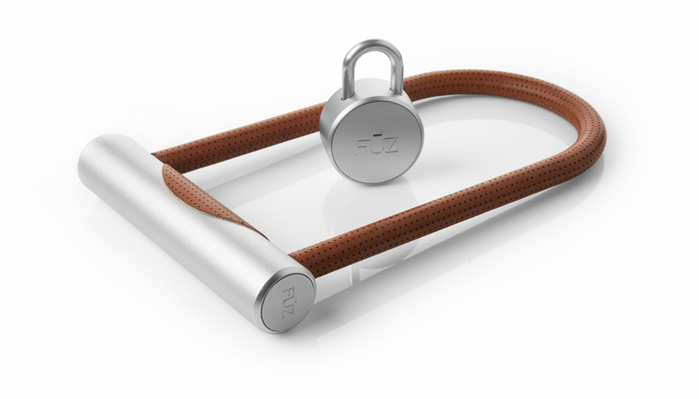 This invention, pronounced "no-key", is well... a keyless bicycle lock. My biggest problem with Noke is that it tries to be smart.
It's Bluetooth-connected so you have to use your smartphone or smartwatch to lock/unlock it. It probably works quite well in California. Not sure if inventors tested it while wearing thick mittens at 0F weather, which would be fairly typical here in Boston.
On top of that, there is social sharing (obviously, because everyone wants to share their bike with others), loud alarm (because they are sooo effective at deterring car thieves that now we have one on the bike too) and GPS tracking (that could be useful in Amsterdam, but here in U.S. we have little chance of losing our bike among many others).
Then, there is a key. Wait, a key for a keyless lock? That's right. In case your smartphone battery has just died you can punch in your access code to unlock Noke, which makes it no different than many combination locks (provided that you would remember the combination that you use maybe once a year). Or, you can also order an optional Bluetooth fob, which turns Noke into a regular keyed lock. Pretty much.
My verdict: Interesting, but no thanks. My old u-lock works well even at less than 0F and when I leave my phone at home. It doesn't need charging and it's built from 5 parts instead of 105. It's just an u-lock and doesn't try to be a kitchen sink.
LiteLok 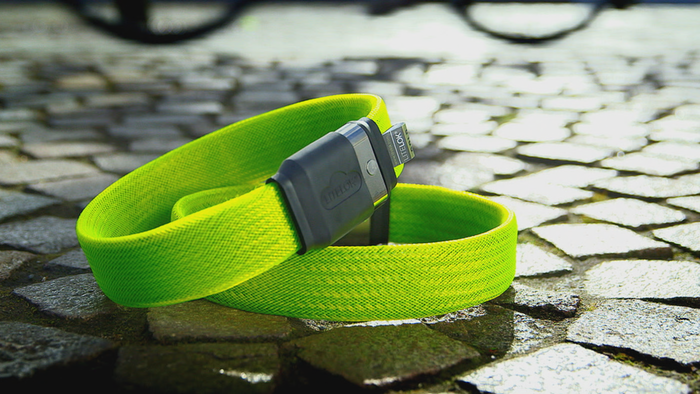 Another bike lock. This one is just plain dumb, that is, it's not a Bluetooth-Facebook-connected gizmo but a simple lock, which means I immediately like it much more.
When it comes to bike locks you can have them light, flexible and insecure (cable locks), heavy, flexible and secure (chain locks) or heavy, rigid and secure (u-locks) - 2 out of 3, as with nearly everything else in this world. LiteLok tries to be light, flexible and secure (3 out of 3). So is it? Well, not quite.
I believe it's secure and it's obviously flexible. But at claimed weight at (just) under 1kg (or 2.2lbs) it's much heavier than my Abus Granit Futura 64 Mini that weighs 692g. Sure, Granit is an u-lock so it's not flexible nor as secure as many heavier locks are. But I wouldn't use it (nor LiteLok) to lock my bike on street overnight anyway.
Having said that, there are two things of LiteLok that I like: the option to chain two of them together into a longer lock (even though any chain lock can do it) and the click-to-lock feature (that makes it better than u-locks).
My verdict: Not bad. It's a nice lock that surely works well. Not a particularly light one but it's lighter than most high-security u-locks. And it's flexible.
Kadalock 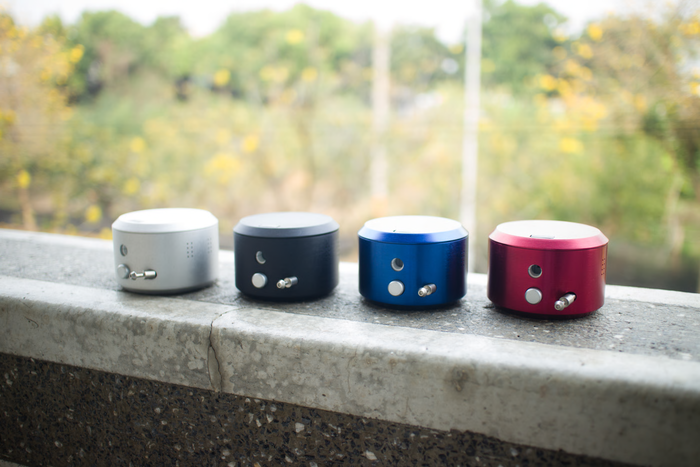 Let's stay with bike locks for a bit longer. Kadalock is similar to Noke just much less secure. It uses a thin cable to lock your bike, it needs to talk to your smartphone to lock/unlock, it has an alarm and it's obviously smart (Cloud-connected, social, etc.).
My verdict: I'll definitely pass on this one. Can't find any feature of this lock that I would like.
Seatylock 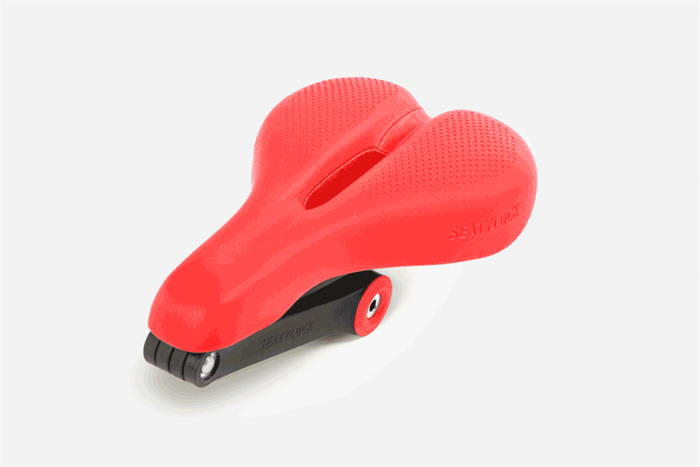 The last bike lock here. This one is really weird because it hides under your saddle. At first I didn't know what to think about this concept. It tries to solve the problem of storing the lock on your bicycle, but this usually isn't the most serious problem we have (unlike, e.g. finding a secure object to chain the bike to). The biggest issue with Seatylock is that you have to use the saddle that comes with the lock. That disqualifies this entire idea right from the start.
My verdict: Who cares if it works. If I can't bolt my favorite Brooks or An-Atomica saddle to it, it's useless.
Rapido 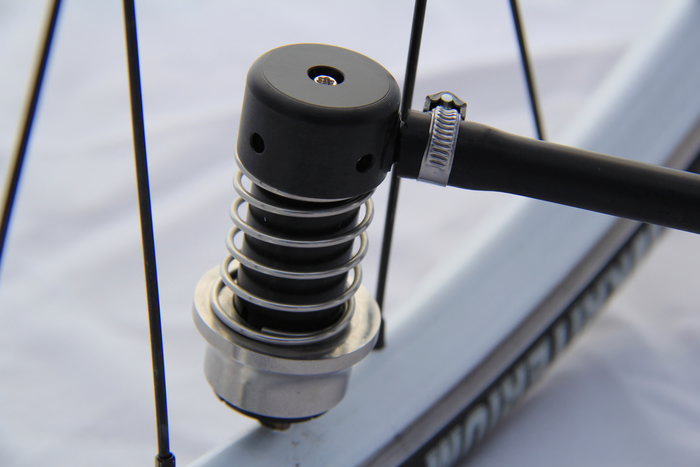 Done with locks. Now something entirely different. Rapido is a pump head adapter - a tiny device that attempts to make your life a bit easier when inflating tires.
In general, it seems to be pretty useful if you happen to use several bikes with different tube valves and a pump that requires different valve adapters. Rapido may help solving the most annoying issue with modern Schrader valves.
The only problem I would expect with Rapido is its size. It may be a tight fit on some wheels, such as my rear Edgerunner wheel. It's has a small 20" rim so spokes sit pretty close to each other and the large disc brake rotor may get in the way.
My verdict: Looks good. For ~30 bucks it may be worth trying. 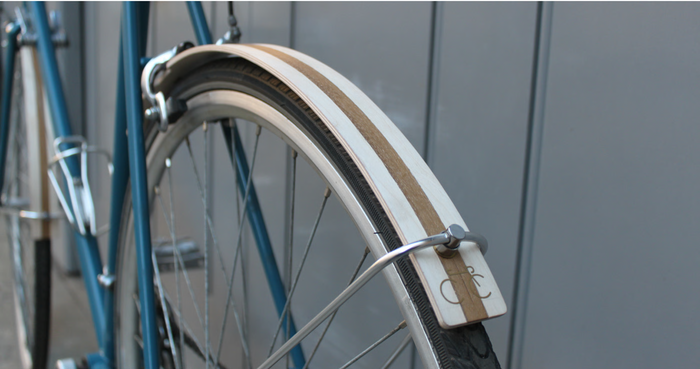 Cam Cycles sounds more like a bicycle manufacturer but these things are just wooden fenders. If you need fenders on you bike you may take a look. And go away. Here is why.
There are three problems with these fenders. One, they are made out of wood (which is not a problem) but like nearly all wooden or bamboo fenders they lack curved edges. They are just flat boards, which doesn't make them particularly effective as fenders.
Two, they are way too short. And I'm not talking about those super short ones shown on Kickstarter because they are likely just a toy. But even the regular Cam fenders would work much better if they were a few inches longer.
Three, the mudflaps are joke. They must be there only for decoration. Such short mudflaps on such a short fenders have simply no function.
My verdict: Poor design. If you want good fenders buy them from SKS, PlanetBike, VeloOrange, Honjo or PDW.
KP Cykler 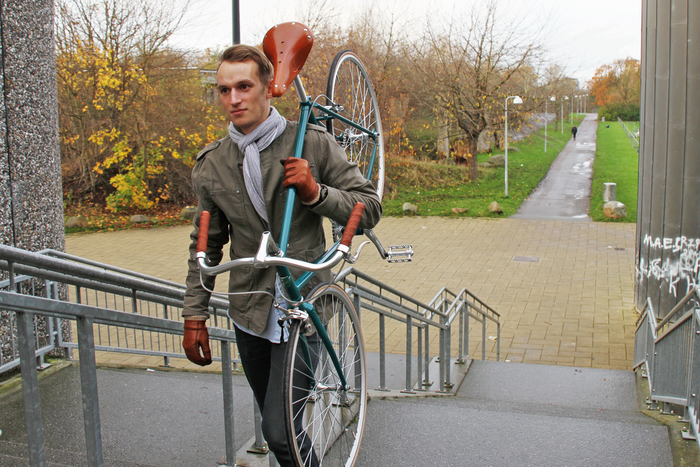 KP Cykler is a custom bicycle manufacturer from Denmark. They make custom brakeless, suicide fixies for Viking hipsters. That should give you idea about what you're dealing with. If you want a truly custom bike, build it yourself.
My verdict: Nothing new to see here. Another company like many others. And because I'm not a Viking, I'm not interested.
Sutro 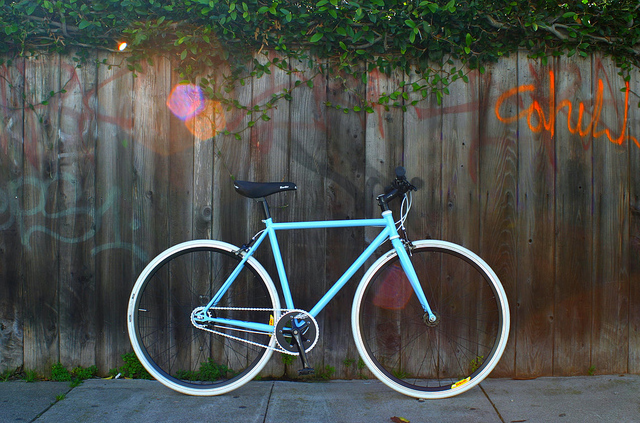 Holy shit, Gordon Ramsay is selling bicycles! Sutro is a custom urban bike "designed for city riding". It must be a Californian city though, where there is no winter, no rain and no night. Some place always sunny where people ride wearing shorts and sandals. Sutro costs over $1200 and comes with no fenders, no rear rack, no chainguard and no lights. But it can be ordered in one of 200 colors (wow!).
My verdict: Boring. Seriously for $1200 I would expect a little more. Sorry Gordon.
The Dreamer 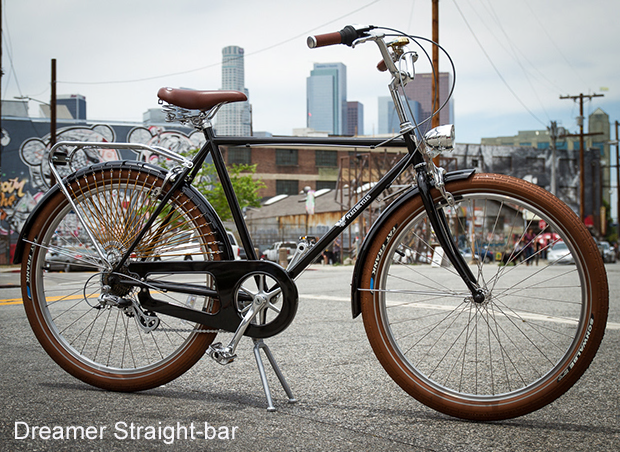 Another bike company but this one may actually offer something usable. The Dreamer is a Dutch-style urban bike with American twist. It comes with full fenders, chain and skirt guards, lights and a rear rack. Can't judge from the pictures how it rides, but it does look promising. Dreamer clearly doesn't have any top shelf components, just a basic steel frame, 7-speed freewheel drive and even it's integrated lights are battery (not generator) powered. But for $700 you can't expect much more.
My verdict: It may be a nice, simple urban bike. Has everything you would need to start your work commute in a $700 package.
Vello 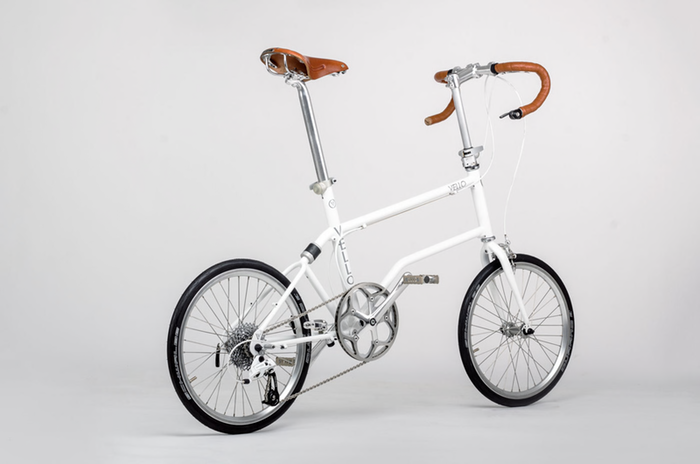 And one more bicycle here. Vello is a "high performance folding bicycle". It folds (well, kind of) and it costs only $900 so it looks like Brompton's cheaper cousin.
My problem with Vello is that its folding ability seems limited. The mechanism is simple but it only shortens the entire bike a bit - far cry from what Brompton can do. Just picture that Vello is a middle-aged man who can bend down and barely touch his toes, while Brompton is a Russian 15-years old gymnast that can fit herself into a purse.
My verdict: Unless you really need a (barely) folding bike and can't afford a Brompton, go ahead and buy his poorer cousin. 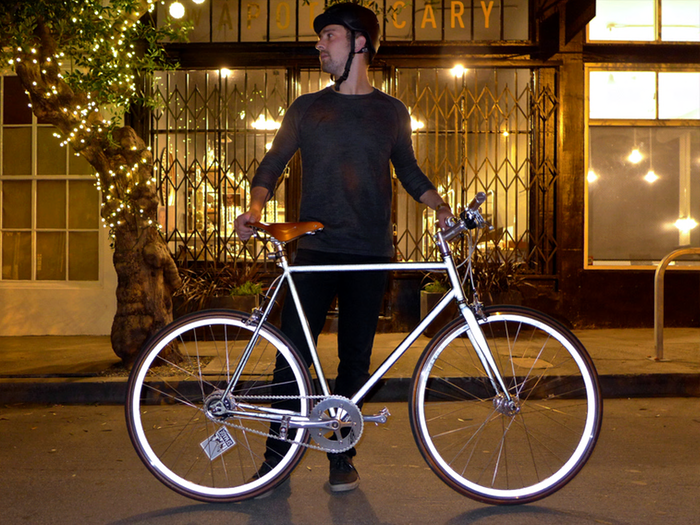 Another bicycle. Lumen is a "retro-reflective city bicycle", which means it's a bike that glows in the dark. Well, sort of. It doesn't actually glow but it's highly reflective from all angles. The trick in Lumen is its frame and fork, coated with a special reflective paint. And while the presented bicycles aren't interesting at all, the paint may actually do the trick to keep you safer at night. But only if you don't mind glowing like a radioactive ghoul.
My verdict: Bikes are boring but Lumen paint is worth a try. 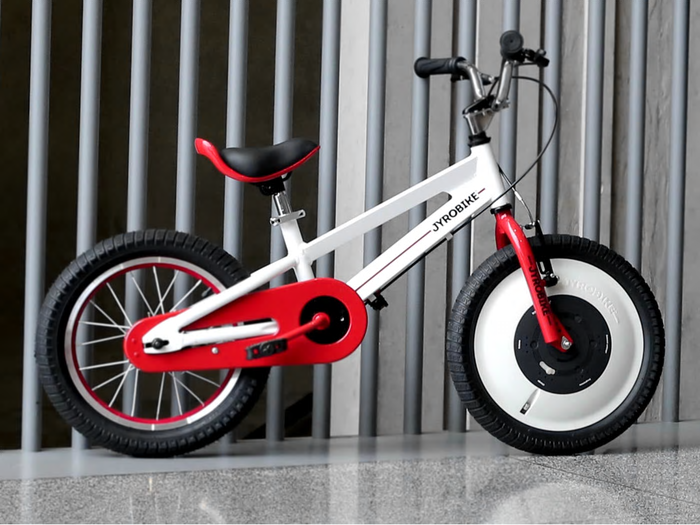 This one is actually really interesting. Jyrobike is a gyroscopic front wheel for your kid's bicycle. By gyroscopic action it can help your child tremendously with the early learn-to-ride process. With a built-in flywheel, I don't expect it to be particularly lightweight, but it's not designed for pro racers anyway.
It's for kids. Those youngest ones including those with some health problems (dyspraxia) who would have problems riding a two-wheel bicycle otherwise. For about $150 Jyrobike can be yours.

Then, there is a secret use for Jyrobike. If you put it on your adult bike (if only you can find a bigger version of it), use it for returning home at 3 a.m. from your favorite bar!
My verdict: Innovative!
Helmet totes by Liz Henry 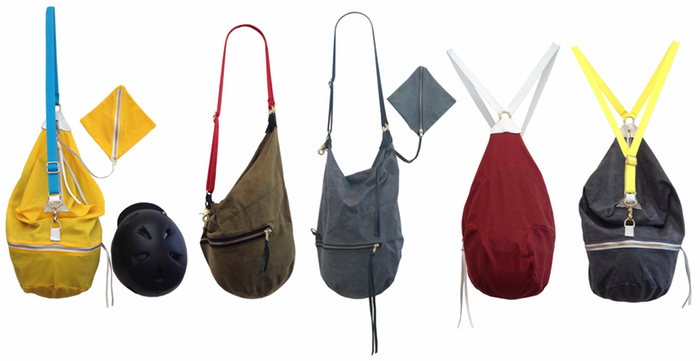 Helmet totes are... just totes to put your helmet in (duh!) and they are supposed to solve the biggest problem cyclists face every day since the invention of wheel: "where do you put your helmet when you are not on your bicycle?". Because carrying it in your hand is so old-school.
I found a better solution to this problem: lose the helmet. You shouldn't need one in a well-designed city. But then I woke up and realized that I live in America.
My verdict: Get it if you need one. I don't.
Fix It Sticks 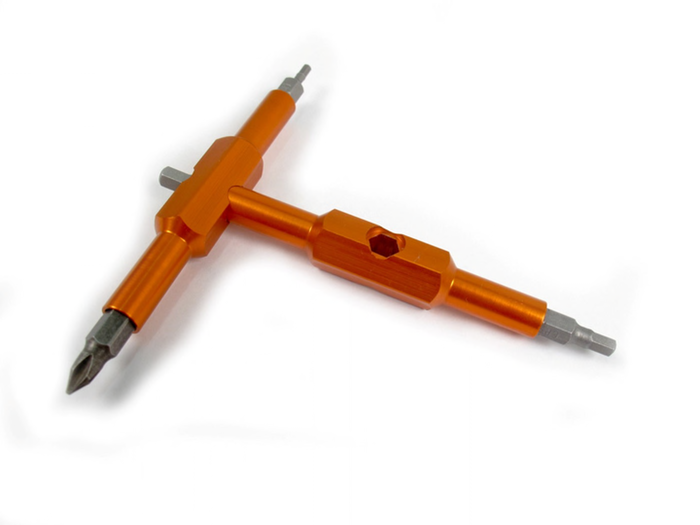 These are some little, sexy hex tools every cyclists should have. I mean, every cyclists should have a set of basic hex keys but not necessary Fix It Sticks. Why? For $25 you get a set of 2 stick tools with 4, 5, 6mm hex keys and a flat head driver. This set is supposed to weigh close to 51g. Is it worth it? Maybe. But for $0.62 you can buy 4mm and 5mm wrenches and spend some time to grind the end of the 4mm one to make a flat screwdriver blade. This 22g set will work for 90% of all on-road adjustments on your modern bike. For the remaining 10% there is always a bike shop nearby.

My verdict: Sleek and light, but most individual hex keys are cheaper, lighter and will work well too, despite being less sexy.
Posted by bostonbybike at 10:44